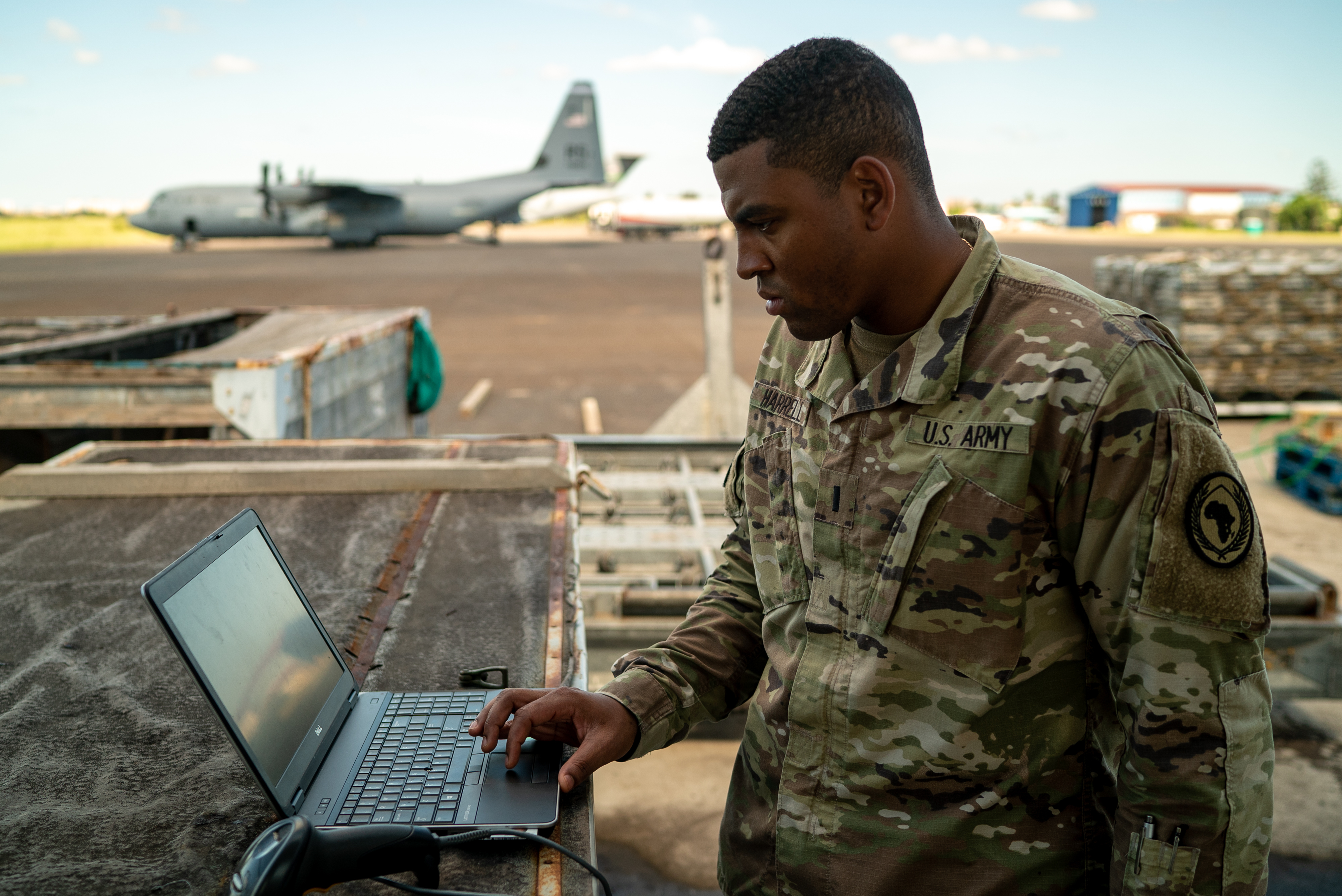 In an operation this visible, it’s easy to see the U.S. service members who are hard at work providing airlift and logistics support on the ground, but most people don’t get to see the behind-the-scenes work it takes to deploy these service members forward and maintain accountability of them during their time in Mozambique. Staff members in the CJTJF-HOA manpower and personnel directorate help make it possible.

“We are responsible for the Joint Reception, Staging, Onward movement and Integration (JRSO&I) of all CJTF-HOA personnel deployed in response to the Mozambique humanitarian relief efforts,” said U.S. Army 1st Lt. Julian Harrell, officer in charge for the CJTF-HOA Joint Reception Center (JRC), who is on the ground in Mozambique. “Close coordination with all the CJTF-HOA directorates and supporting units under the tactical control of CJTF-HOA was absolutely critical in getting our service members to Mozambique.”

“When I arrived in Mozambique, I set up a reception center and implemented the Tactical Personnel System (TPS), a deployment-manifesting platform for all military personnel that requires a physical scan of each member’s Common Access Card (CAC),” said Harrell. “I physically scan the CACs of all personnel, incoming or outgoing, to ensure 100 percent real-time accountability.”

Since arriving in Mozambique, the U.S. military has flown more than 30 missions and transported hundreds of metric tons of relief supplies – including food, nutrition, medical supplies, and vehicles – along with USAID Disaster Assistance Response Team experts and aid workers. With service members working in multiple locations to accomplish the mission, maintaining accountability of all CJTF-HOA service members on the ground in Mozambique is critical.

“Mozambique does not have a U.S. military footprint outside of the Embassy, nor is it in our combined joint operations area,” said Harrell. “Anytime operations are conducted in an unfamiliar or non-operational area, accountability is critical to ensure personnel are receiving necessary support to execute the mission.”

The CJTF-HOA manpower and personnel directorate staff have been coordinating closely with USAID’s DART and U.S. Embassy Mozambique during operations.

“Our role in Mozambique requires continuous and consistent communications and support from the U.S. Embassy and USAID,” said Harrell. “We work with the Embassy to ensure Visa requirements are met, and with USAID to track the continued requirement for U.S. military assistance, and subsequent progress of relief efforts to properly plan the timeline for redeployment.”

“CJTF-HOA’s support is critical to reaching areas affected by Cyclone Idai with urgently-needed humanitarian assistance,” said USAID DART Leader Sureka Khandagle. “As USAID continues to coordinate the U.S. emergency response in Mozambique, we’re grateful for CJTF-HOA’s partnership in helping get aid to people who need it most.”

For Harrell, supporting the humanitarian relief efforts in Mozambique has been a rewarding experience.

“Seeing CJTF-HOA come together as a command, integrate with various other units and non-governmental organizations, and symbiotically work together for such a great cause is something we are all very proud to be a part of,” said Harrell. “Being a part of a mission that is helping to provide relief to a population of over 120,000 displaced Mozambicans is extremely rewarding. We are here to help in absolutely any way we can.”