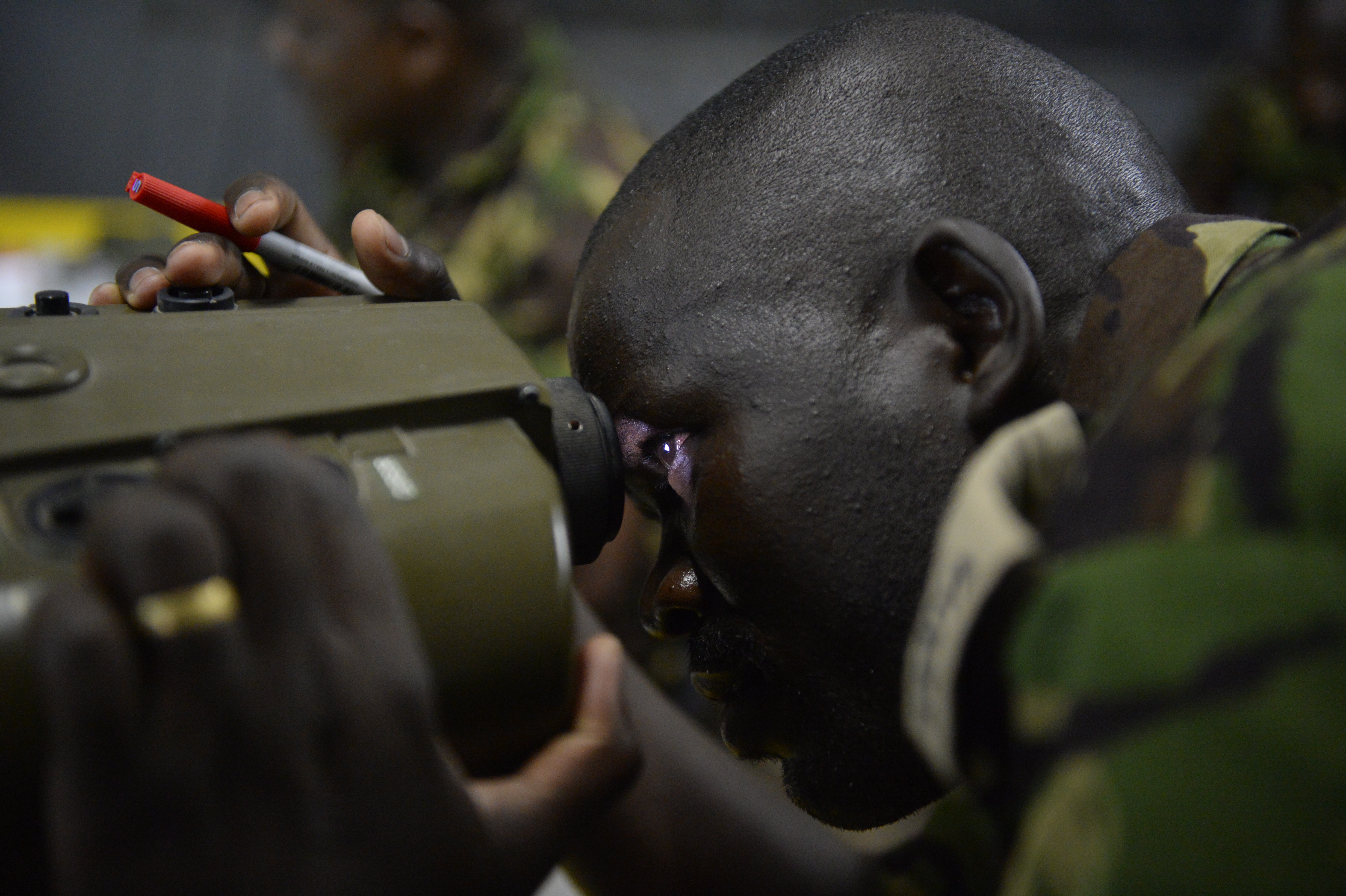 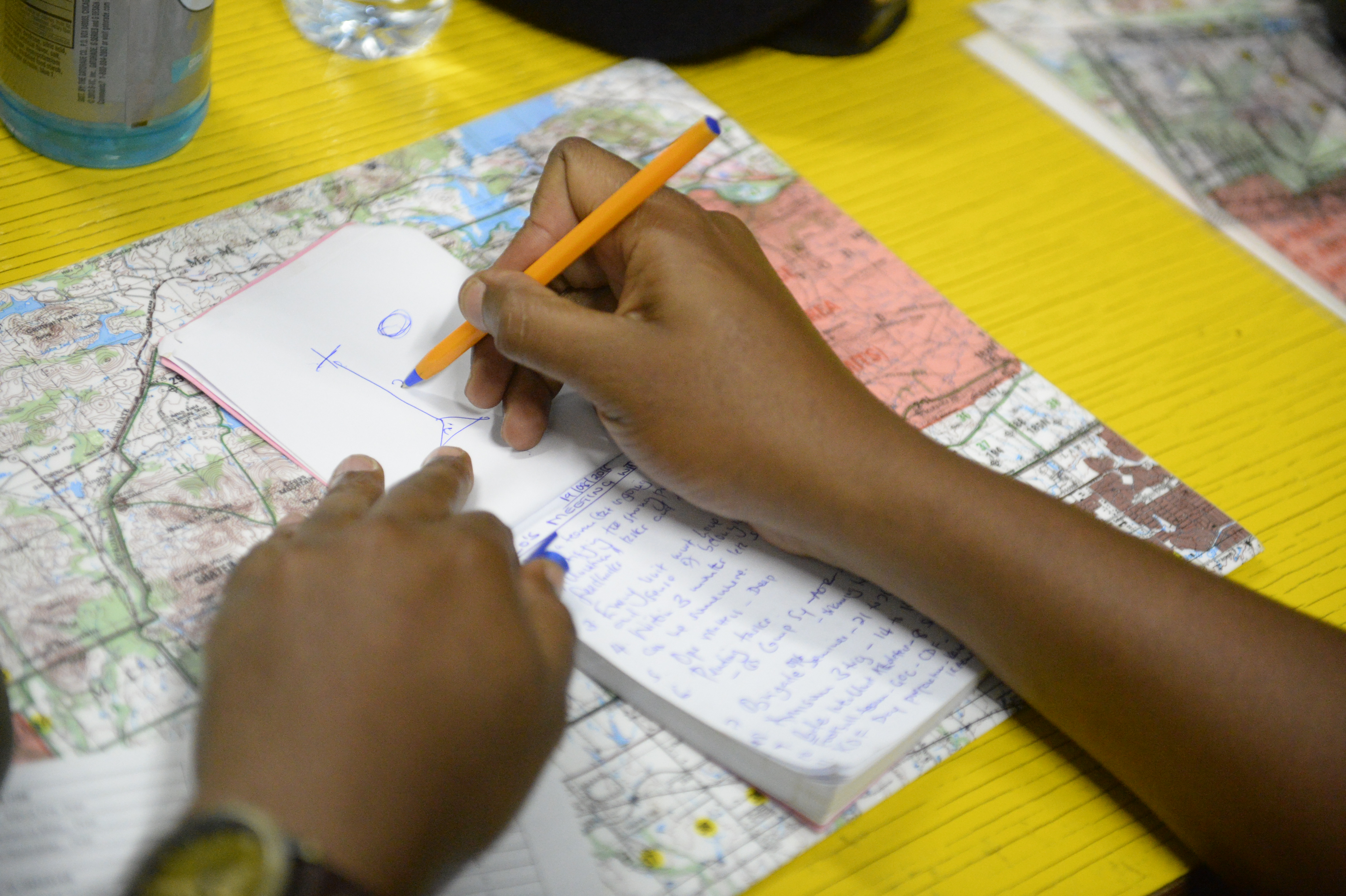 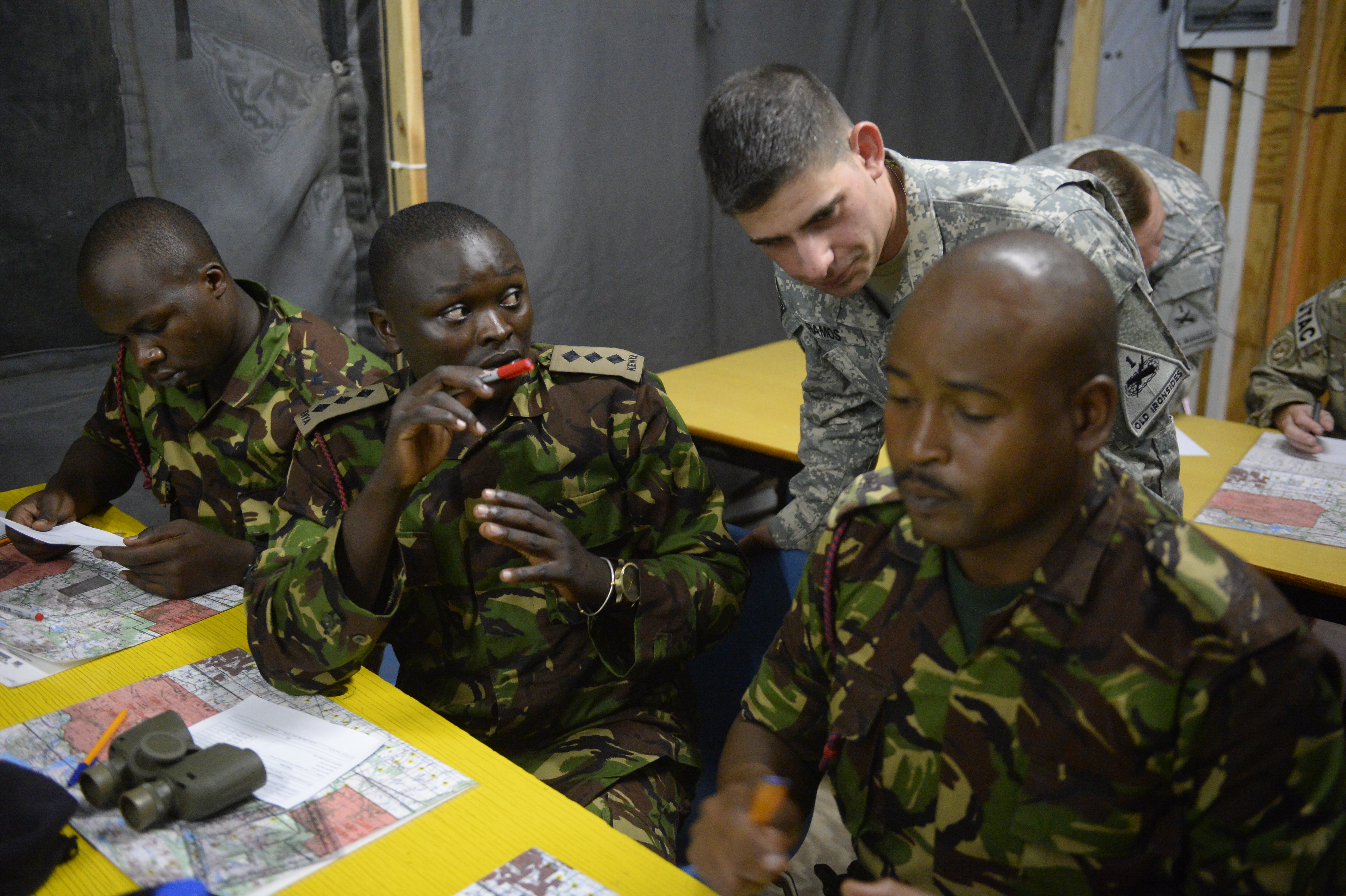 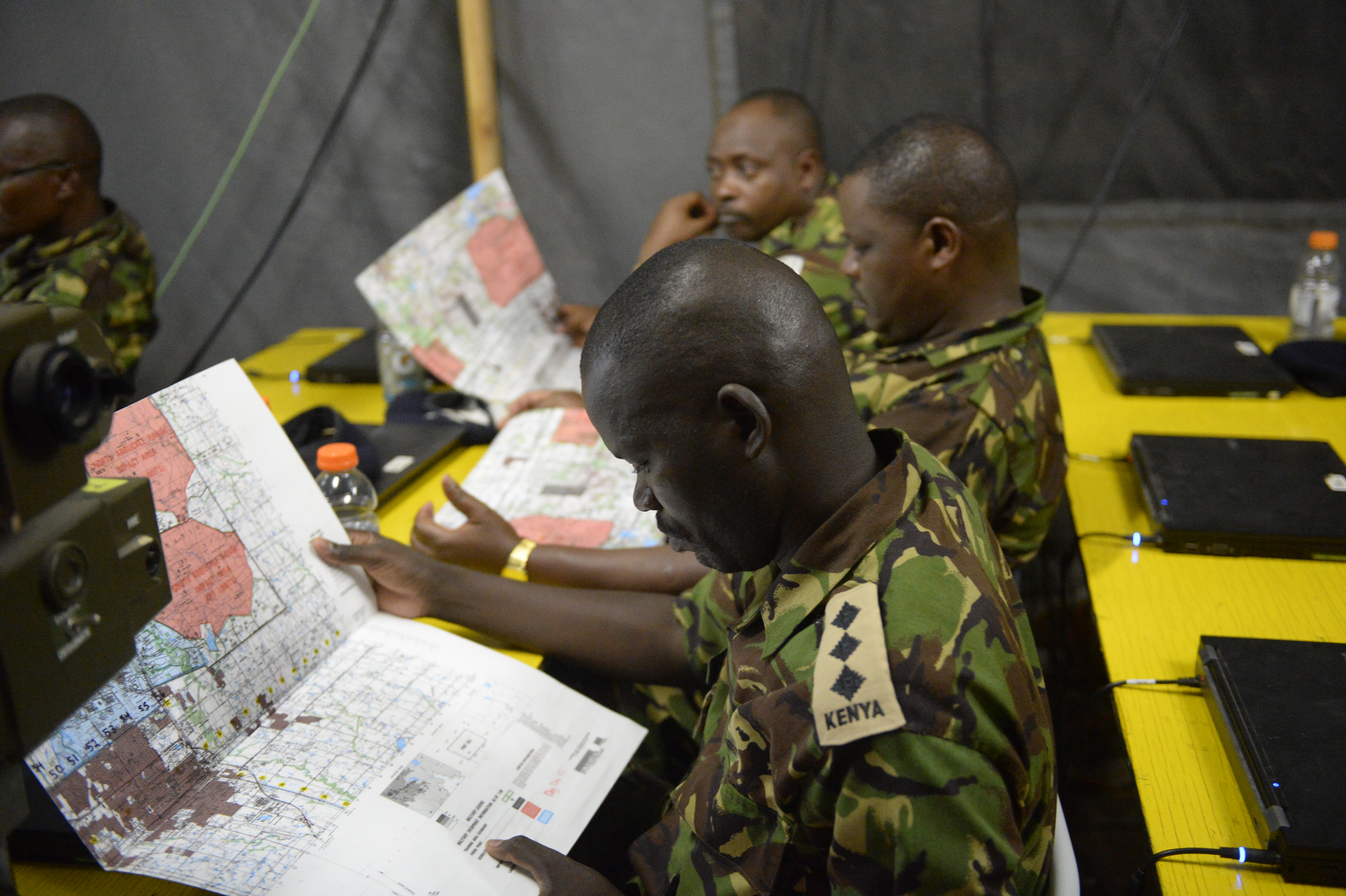 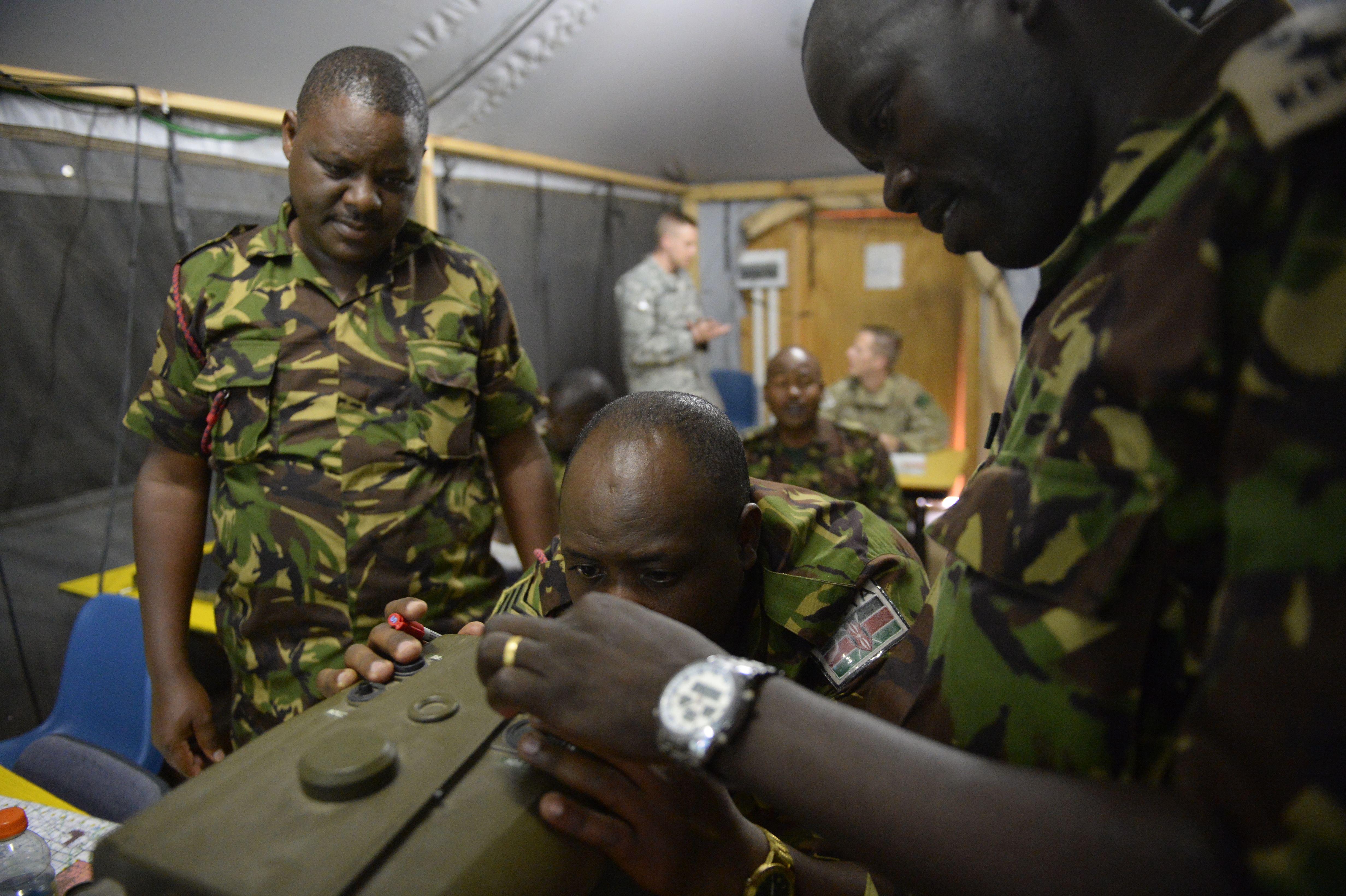 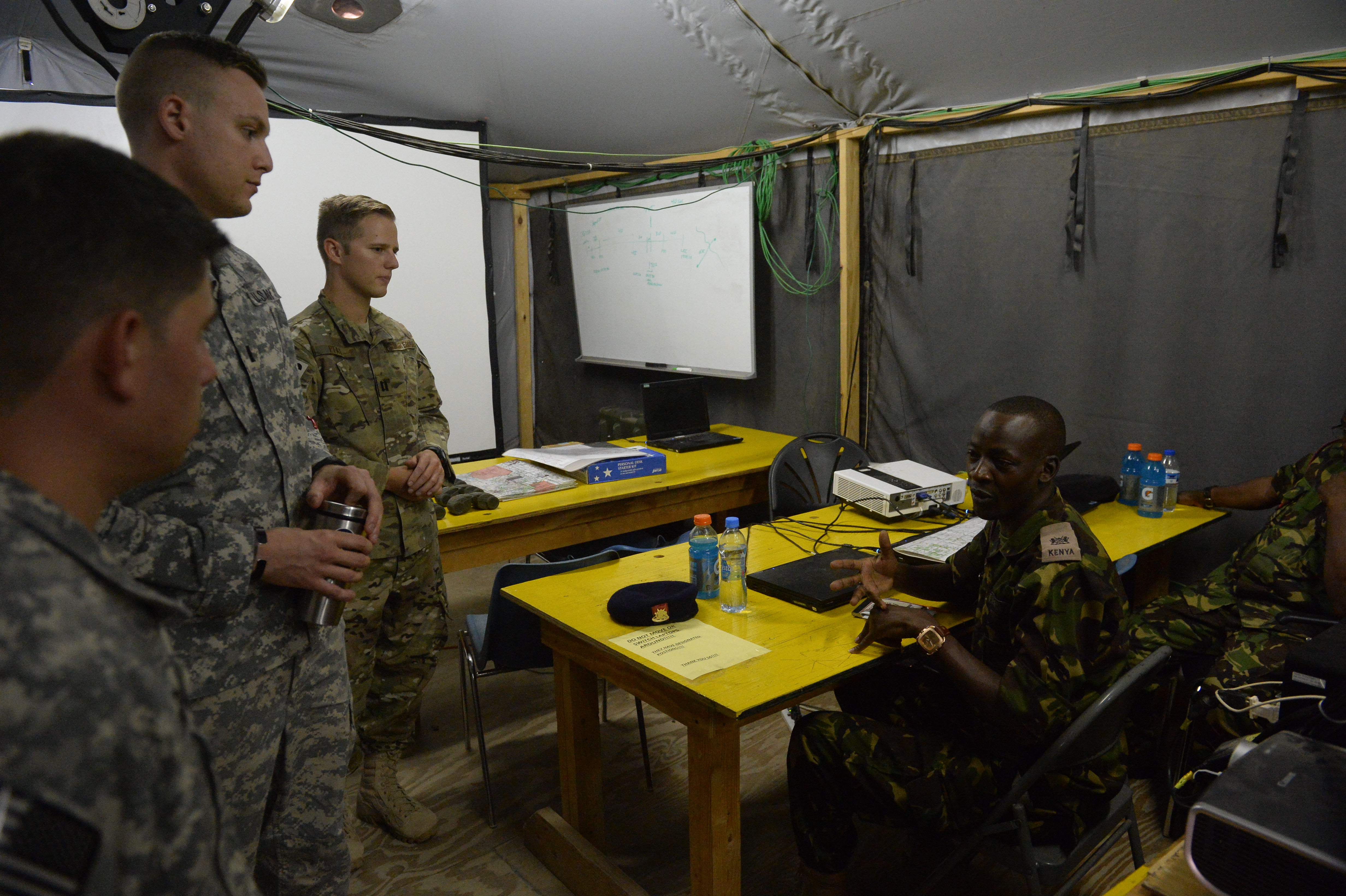 Some of the seminar topics discussed and best practices shared included: the role and responsibilities of the forward observer on the battlefield; equipment familiarization; and target types and target acquisition. The KDF and CJTF-HOA soldiers also conducted exercises in fire support coordination measures, air-to-ground communication, close air support and close combat attack scenarios; and hands-on activities included a call for fire simulator and work with charts and maps.

Major Said Mwadebwe Moyo, Artillery Instructor, KDF, said this event was greatly beneficial to both the KDF and CJTF-HOA participants.

“Our missions and deployments face similar threats and the fact that both of our nations counter those threats in similar ways helps us on the way forward,” major Moyo said.  “From this exchange with 1-77AR Fire Supporters, we will be able to go back to Kenya and try to mirror training around our call for fire simulator and continue our communications training between forward observer and the gun line/command post.”

LT Robert Boeckmann coordinated the training and is a Battalion Fire Support Officer for the 1-77AR, 1st Armored Division.

“It was a significant opportunity for our two nations to work closely together on fire support and artillery topics, as well as build a personal relationship with our Kenyan army brothers.  Hopefully this seminar will give them an advantage, especially because some of these Kenyan officers go into sector soon, to support the African Mission in Somalia. We have paved a way forward for the Kenyan Artillery and the US military to take part in future events, these exchanges will only improve both of our artillery capacities,” said Boeckmann.

SSG Eric Johnson, Effects NCO, 1-77AR, 1st Armored Division, said it was great to work with some of the best troops in Africa and see where artillery works on the battlefield. “It’s always great to work with another professional and experienced fighting force such as the Kenyan Defense Forces,” he said.

The seminar helped improve the KDF defense capability against violent extremists. Also, it provided an opportunity to compare doctrine while providing soldiers from the two militaries an opportunity to learn and work together.

“Anytime we get to work with a foreign army, such as the United States, helps us because we are able to see where right works for them, and the issues they overcome during deployments -- particularly in fire support and artillery procedures.”

Moyo also stressed the importance of the partnership between CJTF and the KDF and how it improves military capabilities.

“An American unit at CLDJ (Camp Lemonnier, Djibouti) will always improve relationships between our two countries and allow for future training and relationships to improve. It is remarkable to see the work between our countries,” said Moyo. “The U.S. personnel were able to see where our artillery has worked in deployments and where it hasn’t, and help us to pave a way ahead for our own training”

The seminar also served to enhance team building and mutual understanding. “The Americans provided exceptional hospitality and working with them was a blessing. Looking forward to future events with our U.S. Army Artillery brothers,” Moyo said.

Major Shadrack Musau, Artillery Instructor, KDF, echoed the sentiment and summed it up, stating “[We are] very privileged to work with American forces, and we are looking forward to future opportunities to work together!” 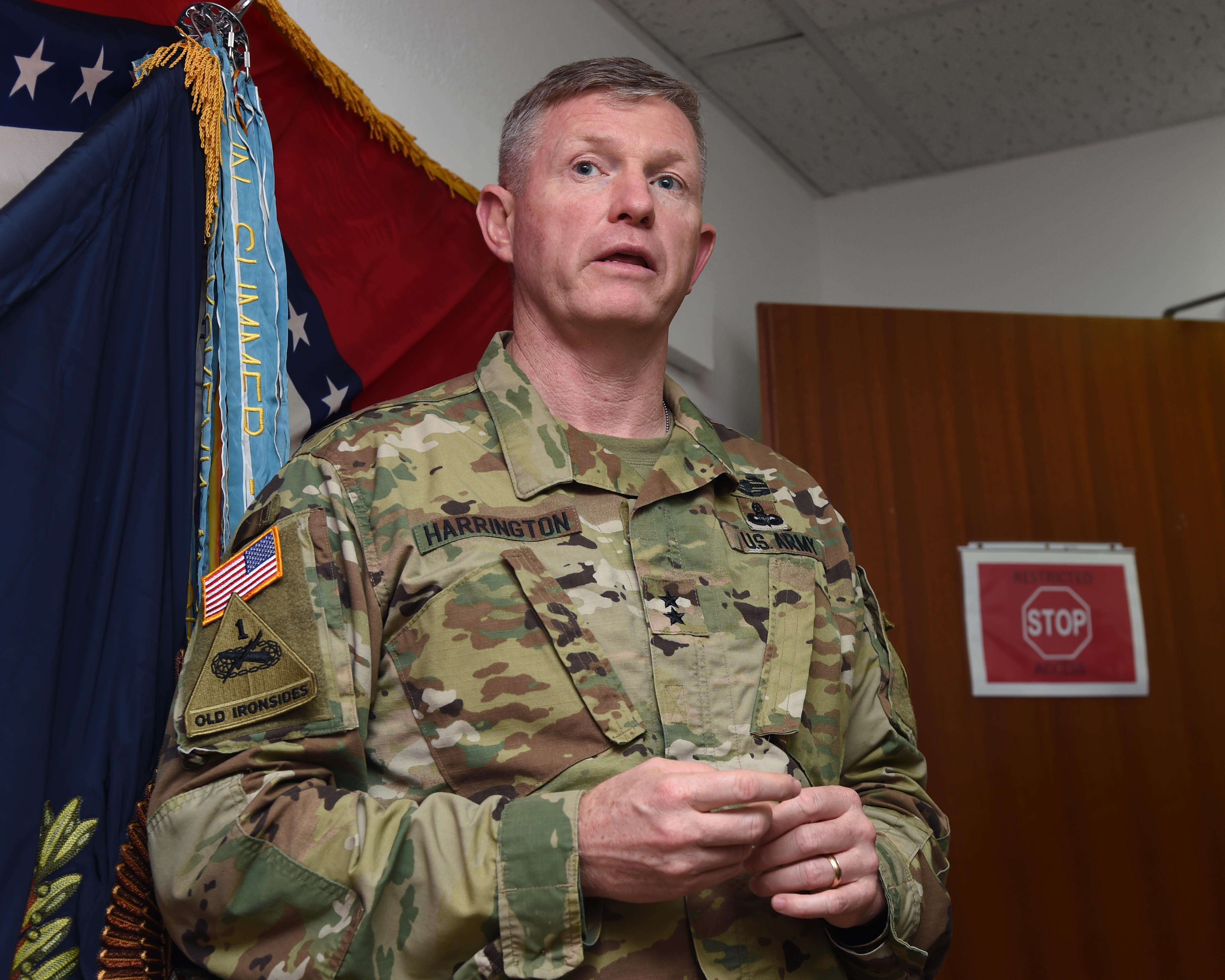