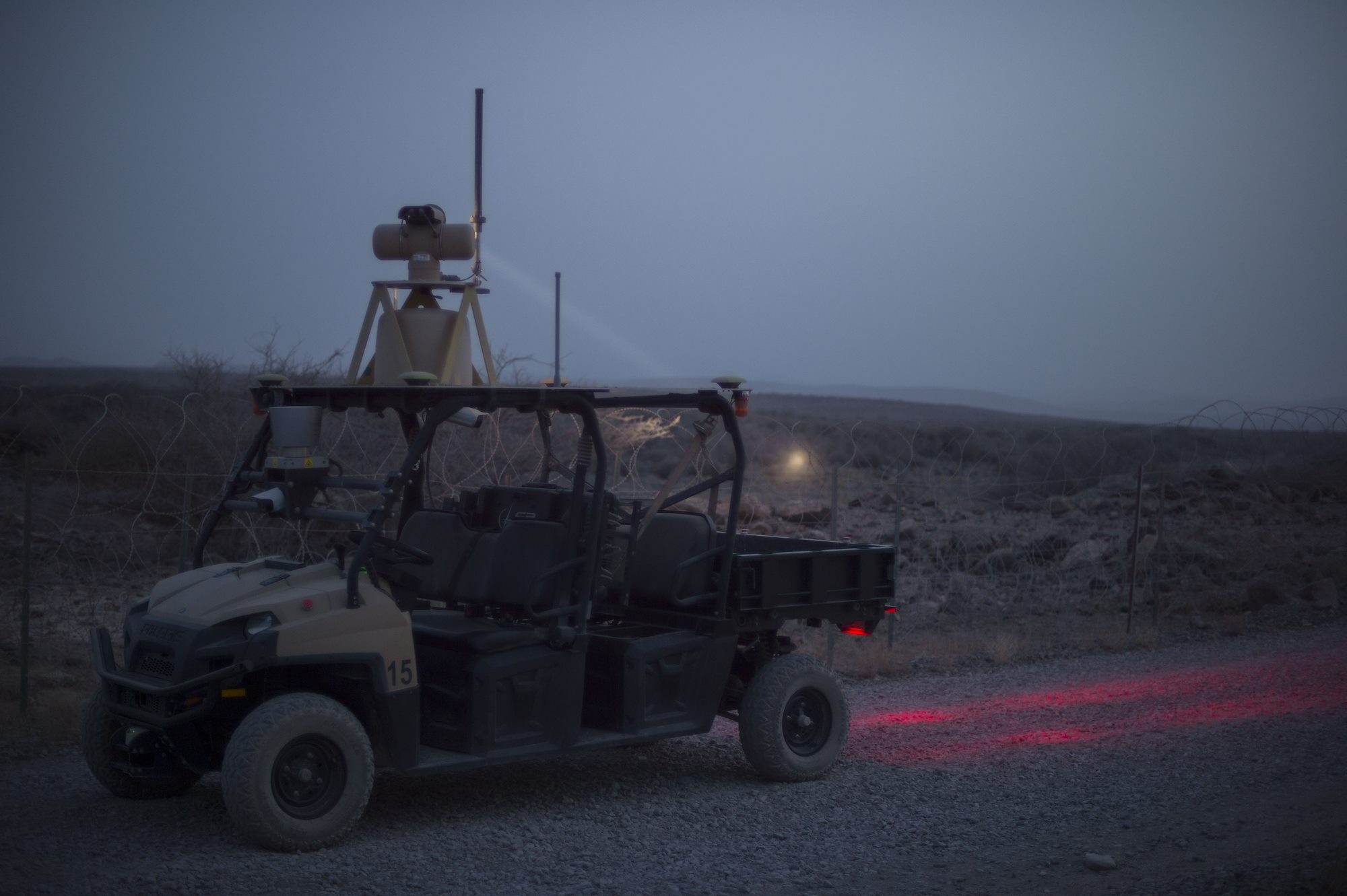 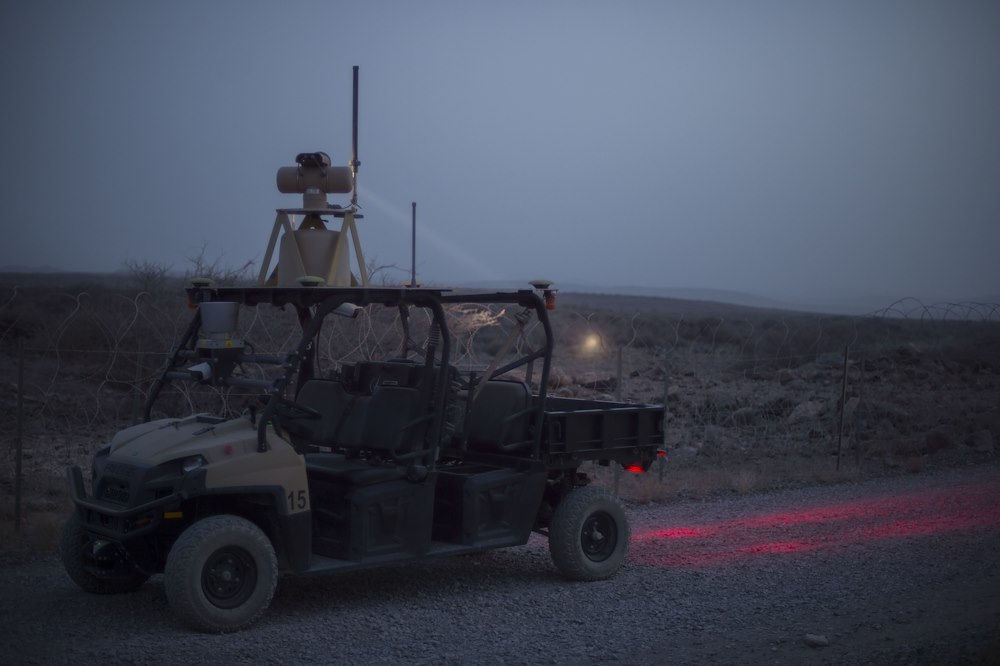 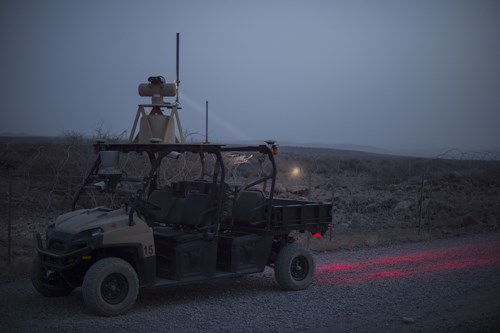 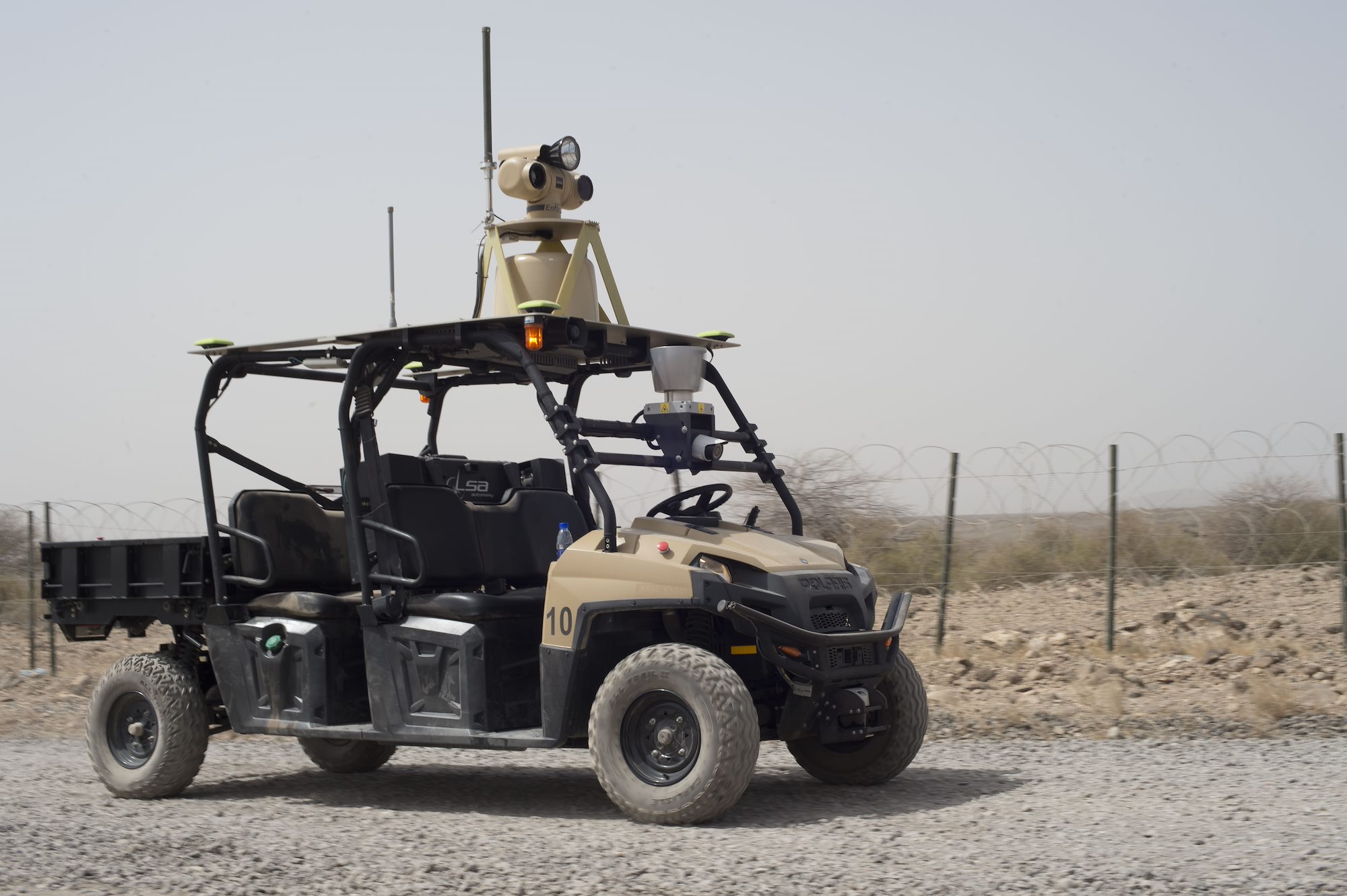 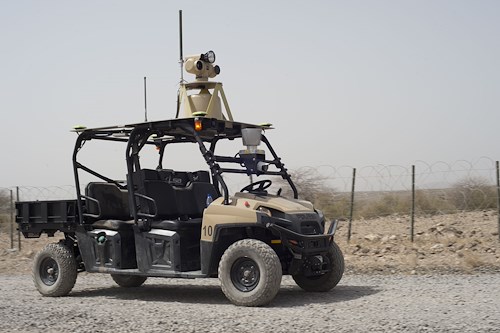 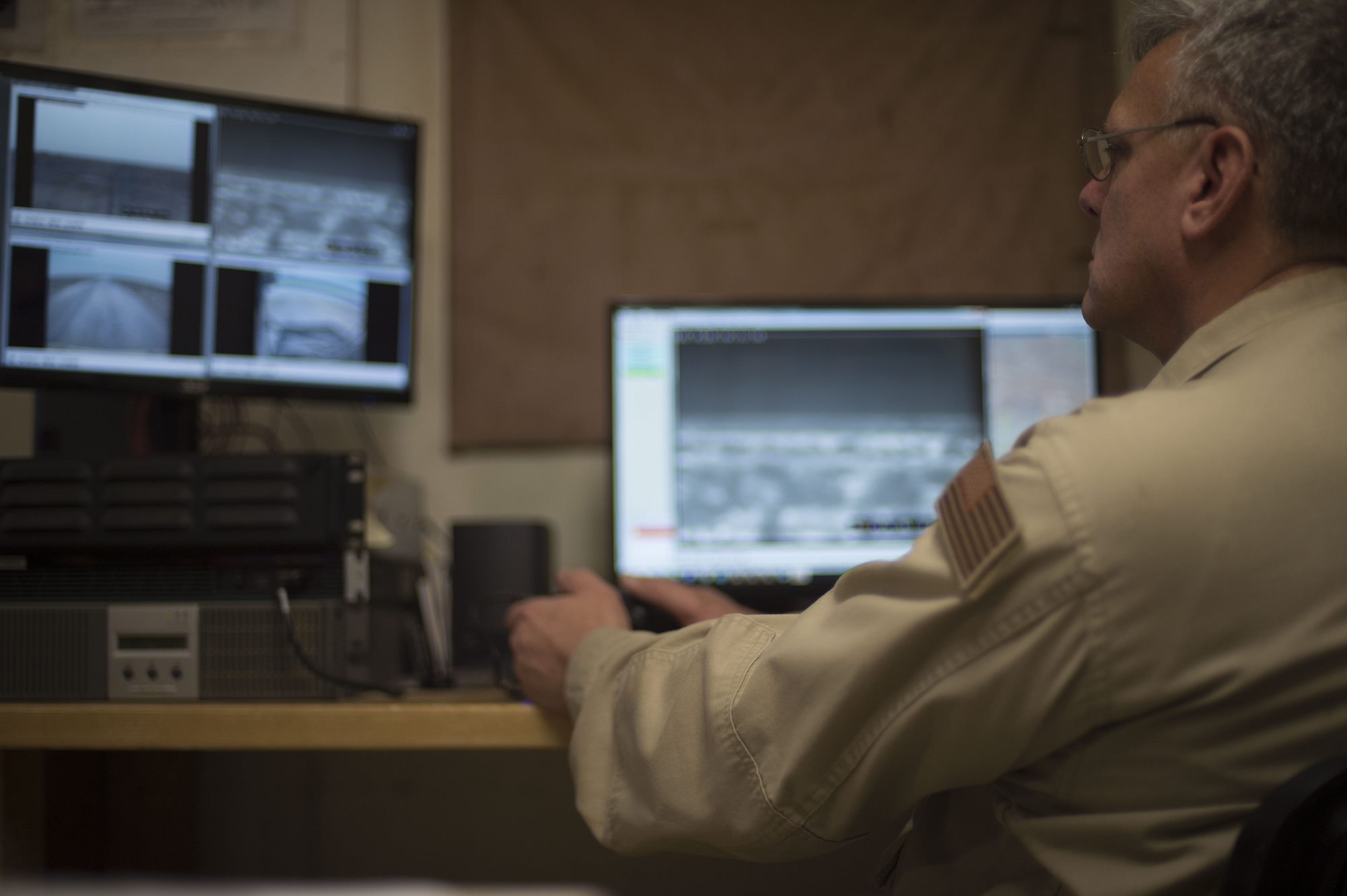 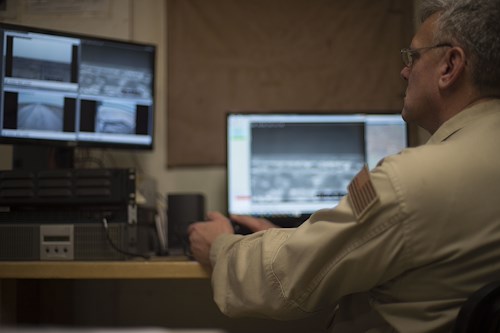 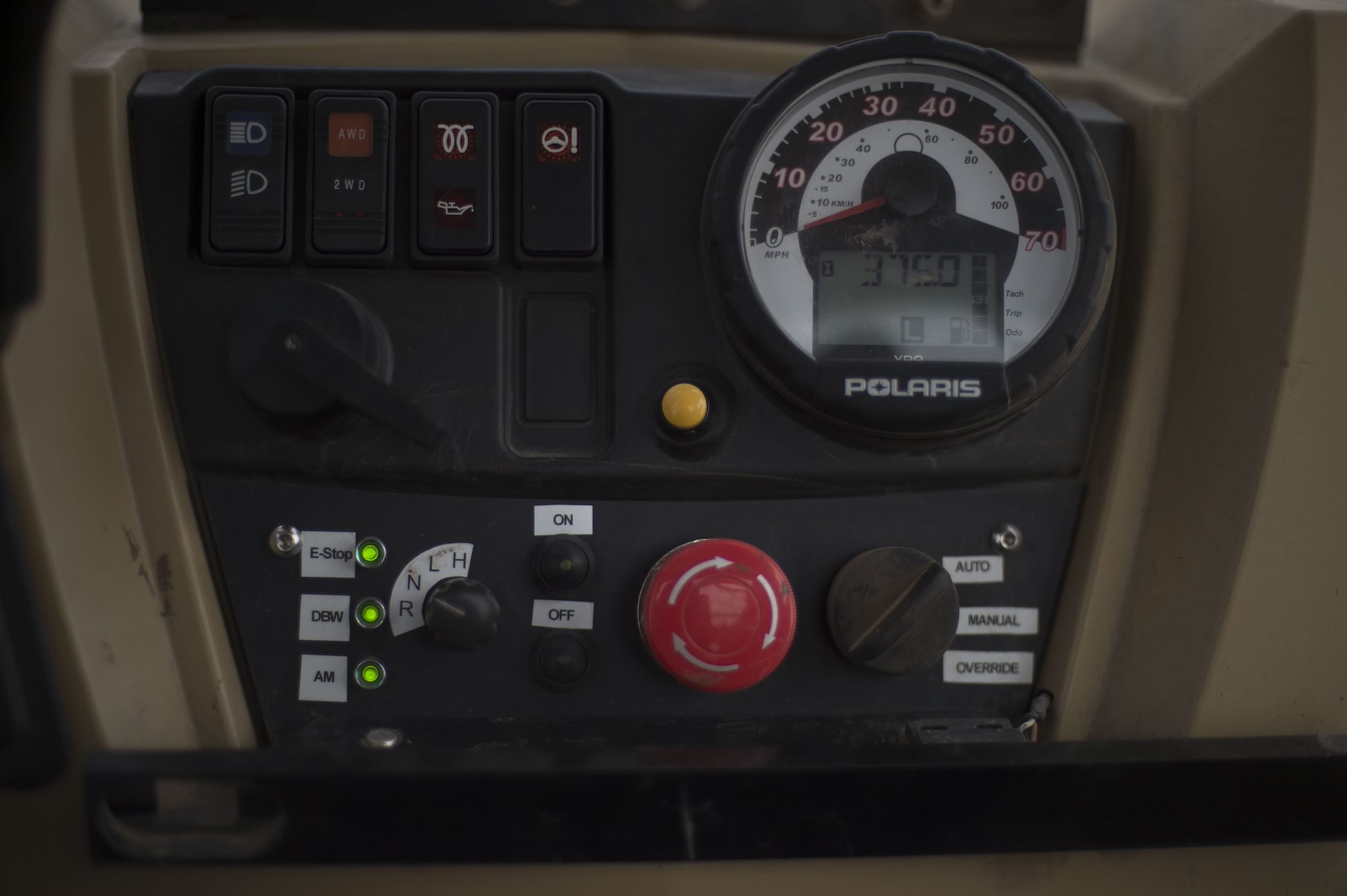 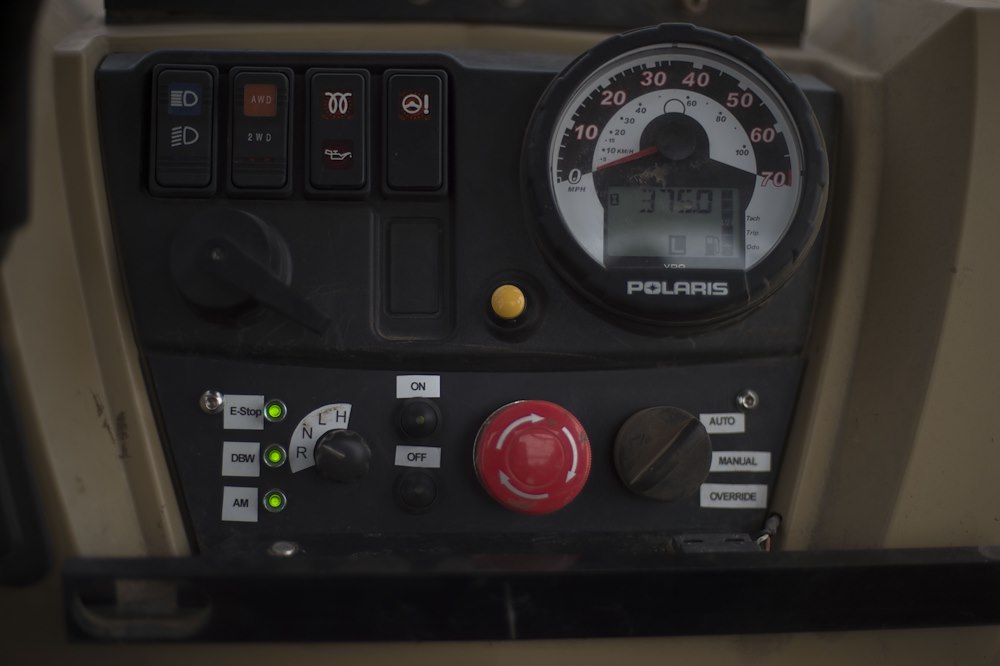 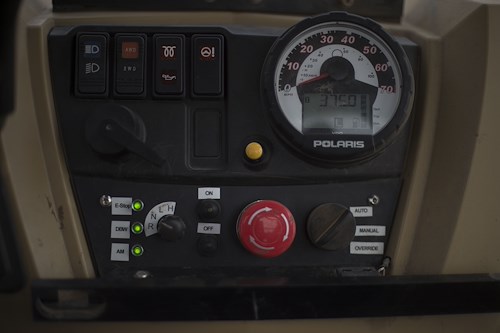 A control console of a mobile detection assessment response system is set to auto mode to allow the robot to control driving pre-designated routes July 9, 2016, at Djibouti. The MDARS system is capable of navigating roads and terrain with out human interface, but is also able to be controlled remotely or with a human driver. (U.S. Air Force photo by Staff Sgt. Eric Summers Jr.)
Share:
Download image
Photo by: Staff Sgt. Eric Summers Jr

As children, people have watched movies or dreamt of a world where robots would one day help humans with daily tasks, such as driving or walking the dog.

And though the world is still catching up the stories of futuristic science fiction, soldiers at an airfield in Djibouti are able to reap the benefits of similar technology today.

“The MDARS, the Mobile Detection Assessment Response System, are security patrol vehicles,” said Joshua Kordani, Land Sea Air Autonomy software engineer.  “They provide the operator with a mobile platform they can use to assess any sort of condition remotely around the base.”

Resembling a high-tech golf cart, the MDARS is an automated vehicle with the primary duty to travel around the perimeter of the airfield to detect and deter any possible threats— and all on its own accord.

“These vehicles are remotely operated, they are autonomous, so you give the vehicle a plan of where you want it to drive and the vehicle makes a decision about where to drive on its own,” Kordani explained.

The MDARS acts as an additional asset for soldiers who provide security for the airfield.

“We can pretty much send [it] everywhere,” said James Bowders, Land Sea Air Autonomy lead operator. “So it can go into harm’s way as opposed to a soldier or an airman. By the role of presence, the patrol activity that it does conveys that there is a physical presence along the perimeter and within the facility. ”

While the main objective of the autonomous system is to deter threats, sometimes that isn’t enough and other capabilities are necessary.

“We participated in several intruder incursion reactions where the robot was the first one on scene and I was able to spotlight the intruder, to let them know that they are being seen and monitored,” Bowders said.  “Then I can have two-way communication through a loudspeaker system and microphone on the vehicle. While that is going on I interact with the BDOC [Base Defense Operations Center] personnel, so they can dispatch the appropriate response teams that they want to the intruders.”

While working at the airfield, the robot has encountered a number of intruders, including humans, camels, donkeys, hyenas, antelopes, goats and other indigenous creatures that MDARS has been able to ward off the facility.

“It is a fantastic asset that’s available to the security commander,” Bowders said. “It simply is a multiplier, with the primary mission of the presence, we convey presence in and around the area, that reduces manpower, reduces threat to that manpower and supports the commander and his mission. Being a former [service member], this is a great asset. “

Kordani, though not a former service member, agrees on the added benefit of the system.

“While the vehicle cannot replace a soldier, it provides an additional asset that the base commander can use to support his security force,” Kordani concluded.