Engaging employment from local businesses helps shape the environment of the U.S. and its regional partners through relationships and agreements, which builds trust, dependability and shared security interests. The Combined Joint Task Force – Horn of Africa Contingency Contracting Office plays a major role in this in Mogadishu, Somalia. 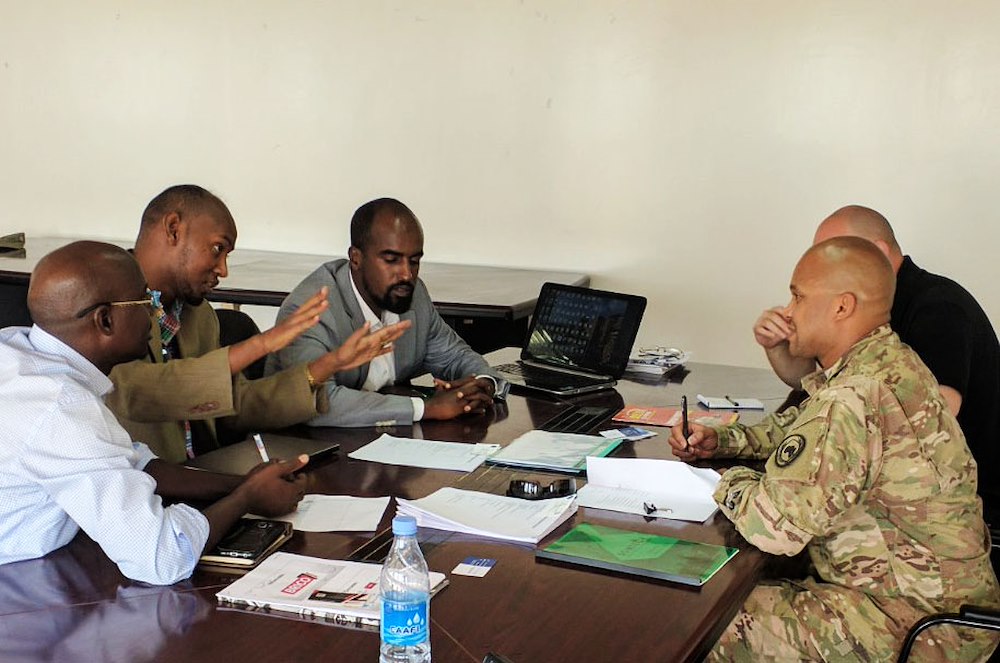 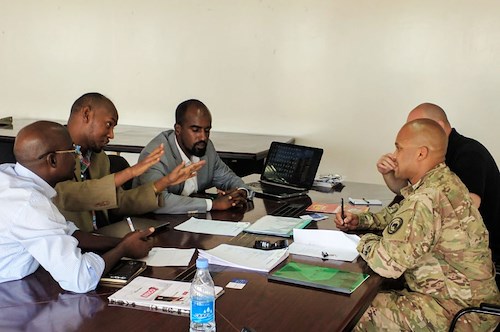 Engaging employment from local businesses helps shape the environment of the U.S. and its regional partners through relationships and agreements, which builds trust, dependability and shared security interests.

According to CJTF-HOA contracting officer U.S. Army Maj. Curtis Sampson, the groundwork for this initiative was laid before his April 2017 arrival to Camp Lemonnier, and the contracting office leadership fully supported the idea of helping open the local vendor market in Mogadishu.

“This effort stemmed from a proposal to decrease the number of items being shuttled from here to Mogadishu via U.S. aircraft,” said Sampson.

The CJTF-HOA/CCO recognizes that employing local vendors is a win-win for both the vendor and the U.S. military, as this supports both the local economy and increases cost effectiveness.

By operating with provincial business, the U.S. government will likely save costs incurred by the transfer of items by air that could be locally sourced instead. Having a variety of vetted businesses to work with is also beneficial for cost savings.

“We had one or two large companies that we were working with, but we wanted to see if we could really open the market and double or triple that number,” Sampson said.

“We needed an outlet for smaller local vendors to become aware of potential contracts CJTF-HOA intends to award,” Carroll said. “To meet this need, we established a CJTF-HOA Contingency Contracting Office Facebook page, at first focused on the Djiboutian marketplace.”

He continued by stating that in the deliberately engaged markets, including Mogadishu, the Facebook page has proven to be an effective and efficient method to advertise contracts and maximize competition. This seems to be especially true for smaller vendors who can now efficiently receive and directly respond to contract solicitations.

Many of the items that CJTF-HOA is looking to procure includes heavy equipment items, such as bulldozers, front-end loaders and dump trucks. Also, construction materials and leased vehicles are commonly on the list of vital articles sought by the U.S. in East Africa. In addition to physical items, logistics companies and construction personnel are entities that Sampson said would most likely be requested.

“Through our new system, we’ve opened it up to more vendors so that they have the opportunity to win a government contract – especially for these smaller companies,” he said.

After the solicitation is posted on the social media site, companies can submit a proposal stating what they can do, how they are going to do it, when it can be done, and the charge. The customer looking for the object or labor is presented with the specifications and then decide which company to hire. Having ranges of timelines, operations and prices allows the U.S. government greater selection, which can lead to selection of the most cost-effective bid.

The CJTF-HOA Contracting Office considers this a win-win scenario: The U.S. can see a decrease in cost for the mission-essential items and services they need and, in turn, smaller local business can get contracts with the U.S. government.

“One of our vendors at the event was so excited to have us there because he could never get a solicitation or a quote because his business is so small,” Sampson said. “He said he felt what we did was great. Instead of waiting on a larger business to pose the solicitation, he can now go on our Facebook page and do it himself.”

Businesses in the Mogadishu area interested in viewing solicitations by the CJTF-HOA Contracting Office can go to: www.facebook.com/cjtfhoa.cco.7.