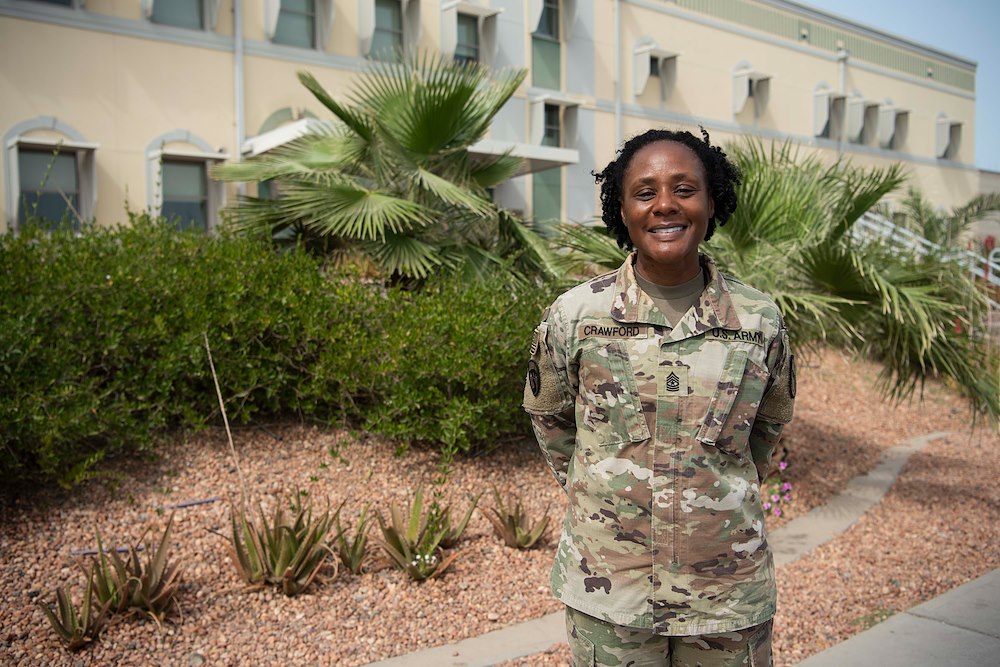 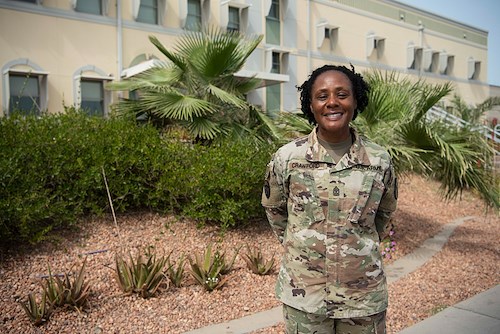 Currently the highest ranking enlisted female within CJTF-HOA, Crawford became part of the one percent of military enlisted members in Jan. 2019, but she originally thought the military would be a temporary part of her life.

“I have no problems saying I joined the military to get the benefits; I was going to pay for college and it seemed like the path of least resistance while having opportunity to do something to make my father proud,” Crawford said. “Even after being in a military household all my life, when I joined the military, it was a culture shock, and I was not sure that I was going to make it.”

Crawford attributed successfully completing basic military training to the 52 other females in her platoon because of their encouragement and willingness to help her succeed. However, Crawford said nothing prepared her for the obstacles she ran into during her time at technical school.

“When I arrived to tech school I was a signal soldier, which when I joined back in 1992, females really weren’t interested in that sort of job,” Crawford said. “My class had 65 students, and two of us were females. Unfortunately, the other female in my class failed out of her exam during our second week of school, leaving me to be the only female soldier in the schoolhouse of about 450. I remember her telling me, ‘Make us all proud,’ and suddenly I felt like I had the weight of the world on my shoulders.”

Crawford took that statement to heart, being selected as the student first sergeant, and was invited to participate in an accelerated learning class, which gave her a one-grade promotion. She also sought to improve herself by doing things like strength training activities and saw the results from her hard work pay off.

“Being the only female in class, I was fully prepared to be treated like a girl. But receiving the kind of support I did from the instructors and the students was incredible, and it truly helped me see that the Army was where I belonged,” said Crawford. “Not only did I graduate the school as the class first sergeant and class president, I had the highest physical fitness score, the highest student average. I was amazed at the things that I accomplished.”

As Crawford’s career progressed, she said there were many jobs and tasks that she wanted to participate in that seemed adventurous, but she tended to stick with things that were safe and comfortable.

“I didn’t really challenge myself, but somewhere mid-career I had mentors and leaders that showed so much faith and confidence in me and helped me decide that it was okay to fail and it was okay to not be perfect at things as long as I tried,” said Crawford. “If I could go back and give any advice to my younger self it would be, stay fearless and don’t be afraid to fail, because when you do, you grow and learn and it really strengthens your character. Whether you think you can or you can’t, you’re right, so, why not just give it a try?”

It was around 2010 when she decided to switch over to the finance career field. Then about six years ago, she was selected for a broadening assignment to work in equal opportunity. Crawford said she was hesitant to leave finance, but after completing the EO training course, she saw the design of the program and what it means to the department of defense, and it completely changed her outlook.

“I began to see it wasn’t the differences in people but the similarities that made it so vital to us being in the world’s greatest fighting force, and it is absolutely those differences of us that make us unique,” Crawford said. “People like to call America the great melting pot, but I’d like to think of it slightly different. I’d like to think of us more like a mixed salad and how we get in there and mix altogether. Separately, we maintain who we are and what we are, but together, we taste great, we do good work, and that’s what’s important to me.”

Crawford said she enjoys getting out from behind her desk and being in the mix with service members any chance she can, and any day spent outside with the troops is a great day for her.

“One thing about Sgt. Maj. Crawford is that she is so personable and amazing, and people really gravitate to her,” said U.S. Army Lt. Col. Krista Vaughan, joint command inspector general for CJTF-HOA. “She’s just a unique person who’s really big-hearted; she’s so smart and a great asset to our team. She’s willing to roll up her sleeves and work with the young service members and embodies what it means to be a true leader.”

As far as what the future holds for Crawford, she hopes to become a command sergeant major and lead from the battalion level.

“With the career fields I’ve been in, I think I would be a vital asset to the DoD and U.S. military if I am able to work with a battalion commander counterpart,” Crawford said. “Young service members today are highly intelligent, and I’m so envious of them. They are so technologically savvy, and their brains work quicker than ever before. I really want to be able to instill confidence in the skills and abilities of our service members to guide and mentor them into some of the things that maybe I would not have done when I was in their shoes.”