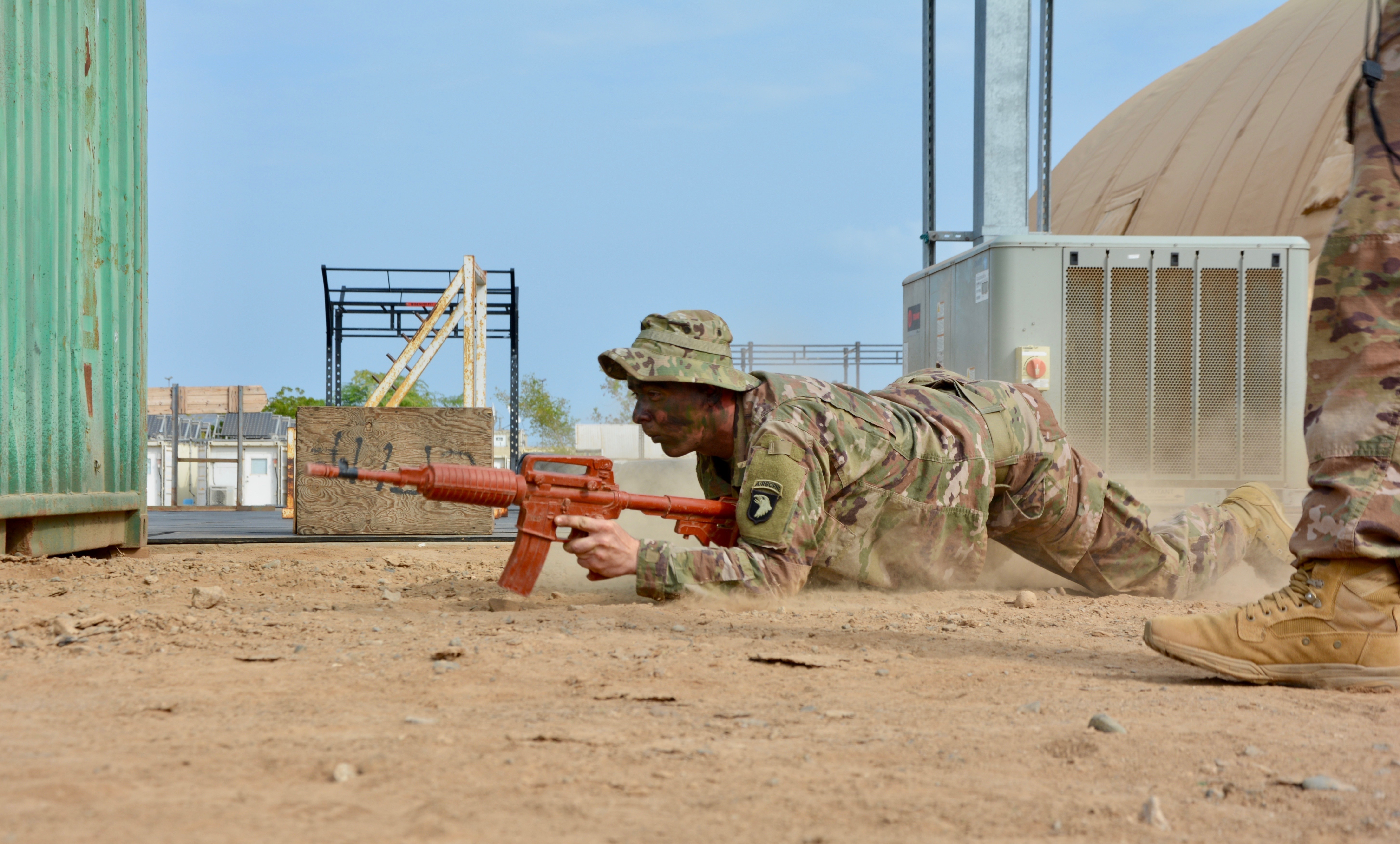 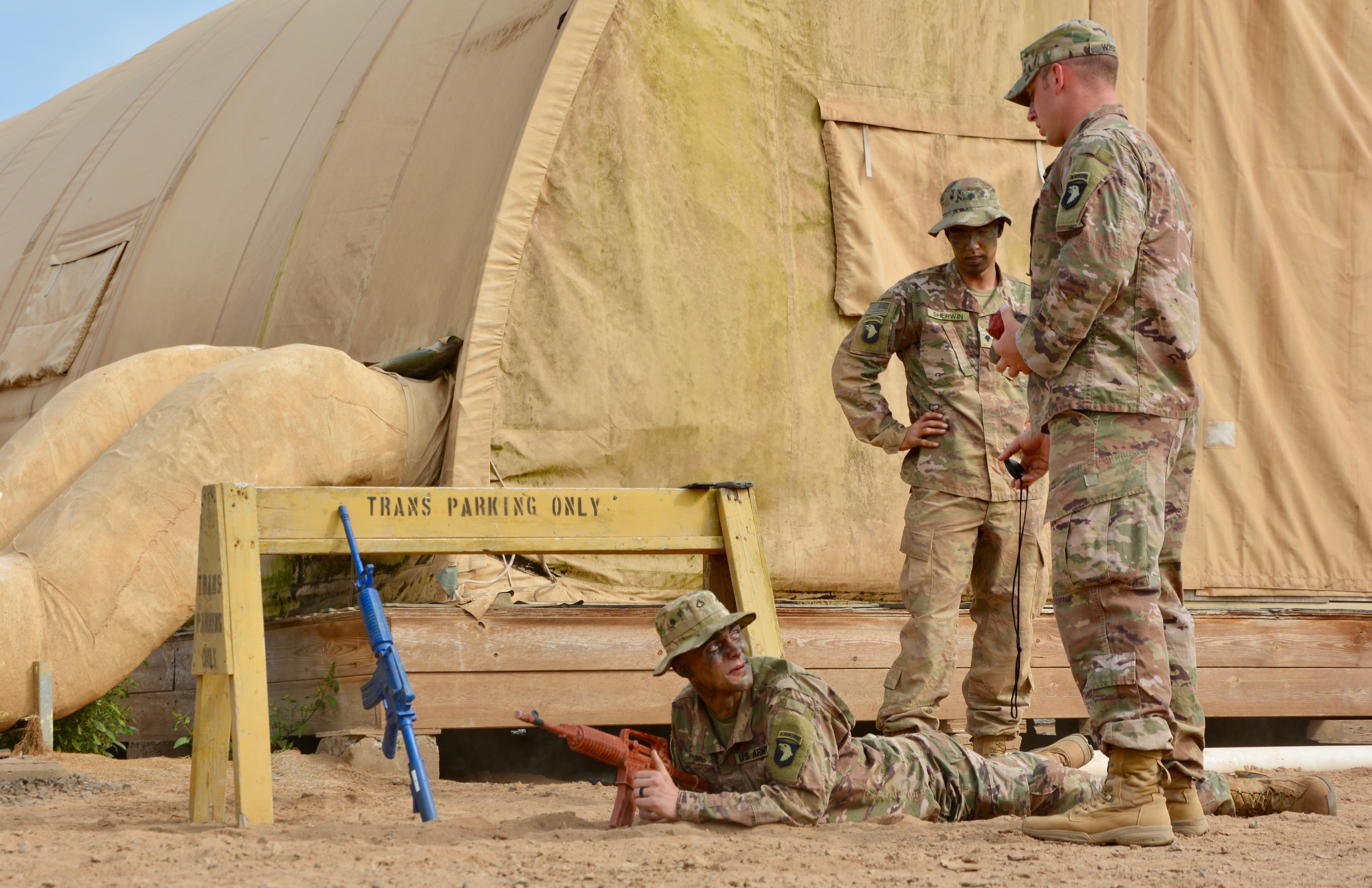 East Africa Response Force train for Expert Infantryman Badge while deployed U.S. Army Staff Sgt. Tyler Wisely, assigned to Bravo Company, 1st Battalion, 26th Infantry Regiment, 101st Airborne Division, shows his Soldier the '00' on the stopwatch before testing him on his ability to disable a bunker with a hand grenade during training for the Expert Infantryman Badge at Camp Lemonnier, Djibouti, Dec. 18, 2018. Members of the Fort Campbell, Kentucky unit demonstrated a mastery of critical skills that reinforce their ability to respond to emergency situations at U.S. Embassies in the East African region as members of the Combined Joint Task Force-Horn of Africa (CJTF-HOA), East Africa Response Force (EARF). 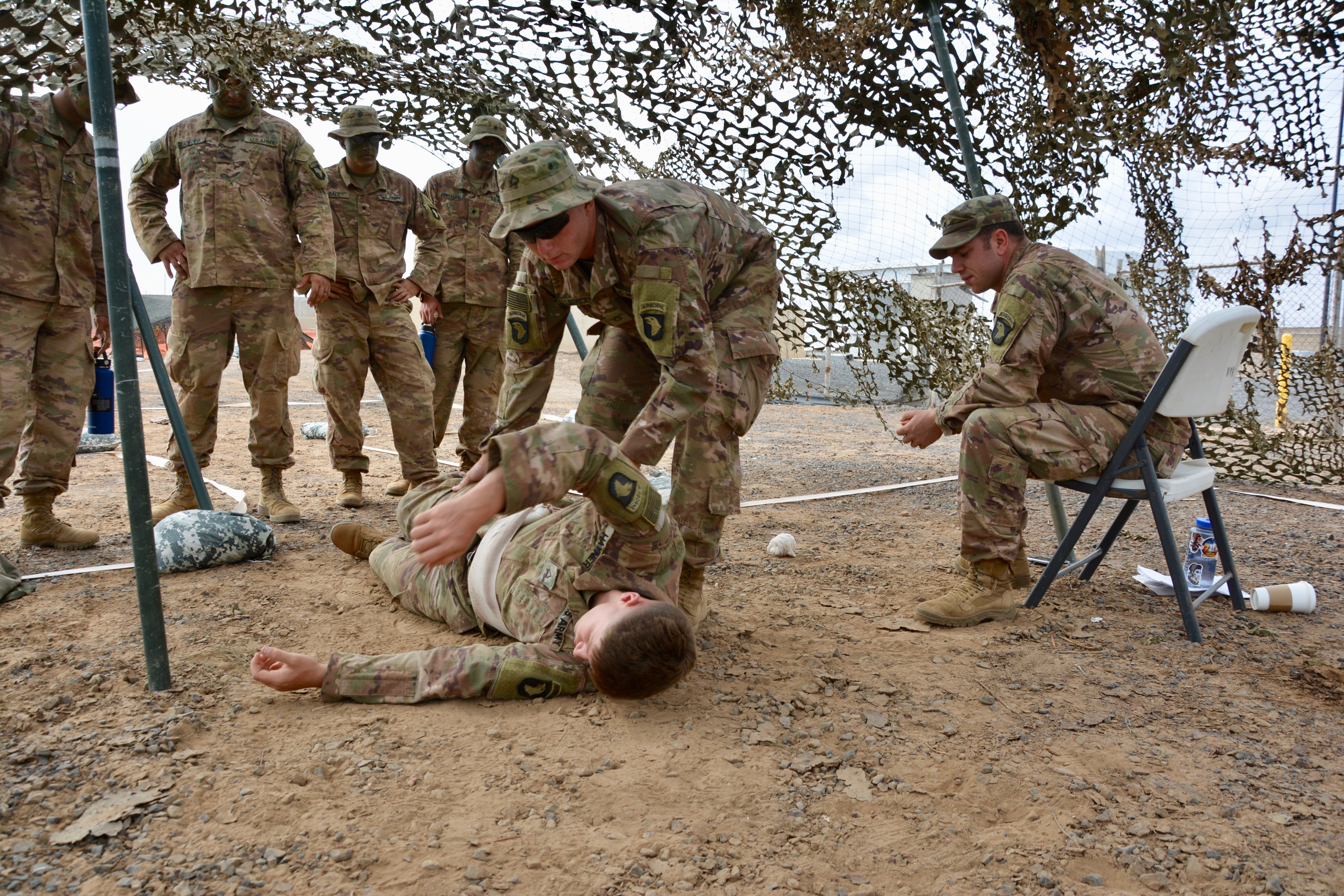 CAMP LEMONNIER, Djibouti – It’s been a challenging four days for more than 80 Fort Campbell, Kentucky Soldiers, who dream of one day earning the mark of excellence in their craft--the Expert Infantryman Badge or EIB.

“The training was mission enhancing and reinforced the EARF’s rapid response capabilities while being a good opportunity for individual training and familiarization for future EIB opportunities,” said McCarthy, from Kansas City, Kansas. “It gave a baseline understanding of different positions Soldiers might help support during a crisis situation, particularly the medical and radio communication lanes.”

Events in Africa and the complexity of the security environment have demonstrated the need for specialized response forces capable of responding to emergencies at U.S. diplomatic facilities in Africa, and training his Soldiers on basic infantry skills is just another way to prepare for that mission, McCarthy added.

Testing usually consists of 30 tasks carried out in three lanes: weapons, patrol and medic; however, significant changes were made recently to the EIB manual and task requirements. Bravo Company’s training ensured its Soldiers were prepared for these changes with tasks that included indirect fire, move under fire, grenades, and care under fire.

“It really provided them a first look at the step-by-step task list while completing each task to a time standard,” McCarthy said.

In 1944, Army Chief of Staff George C. Marshall began development of the EIB award to honor the Infantry Soldiers’ hard hitting role in combat and symbolize proficiency in the Infantry arts. Currently, the test is given over a five-day period and every EIB candidate must pass an Army physical fitness test with a minimum score of 80 percent in each event, a day and night land navigation course and then spend three days rotating through the test’s 30 consecutive stations.

The deployed environment offered some challenges; however, the non-commissioned officers running the lanes tried to make it as realistic as possible.

“I looked at what our higher headquarters required during its testing and adjusted based on the equipment we have available as well as what would be most beneficial to our mission here – medical, weapons, and communications,” McCarthy said.

And while the lane familiarization is not physically demanding, said U.S. Army 1st Lt. Anthony Mosqueda, a platoon leader in 3rd platoon, only 14 percent of Soldiers tested earn the EIB, according to the U.S. Army Maneuver Center of Excellence.

“It’s really about testing their mental ability to retain information during a crisis,” said Mosqueda, from Little Rock, California. “That can be the difference between life and death on the battlefield.”

U.S. Army Staff Sgt. Tyler Wisely, who earned his EIB in 2016 at Fort Campbell, agreed saying the most important lesson for him was attention to detail.

“Earning the EIB shows they can follow directions and are disciplined,” said Wisely, from Philadelphia, Pennsylvania. “All of these skills: patrol lanes, medical, weapons lanes are things Soldiers might see in battle. The end state, is each Soldier is competent and able to carry out the task given them.”