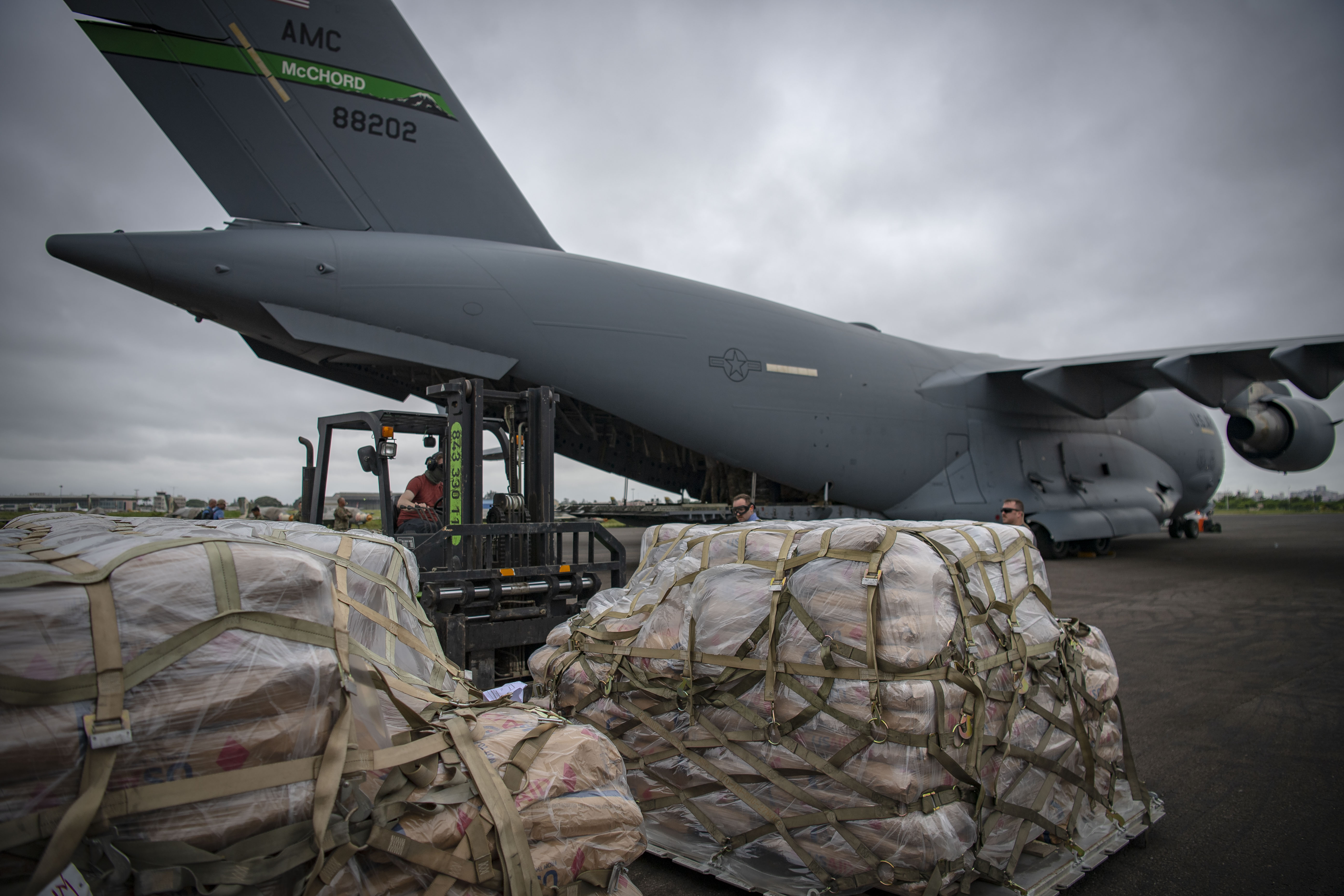 CJTF-HOA delivers humanitarian aid to cyclone-ravaged Mozambique A U.S. Soldier loads bags of food on a C-130J Hercules assigned to the 75th Expeditionary Airlift Squadron, Combined Joint Task Force-Horn of Africa, at the airport in Maputo, Mozambique, March 29, 2019. The task force is helping meet requirements identified by USAID assessment teams and humanitarian organizations working in the region by providing logistics support and manpower to USAID at the request of the Government of the Republic of Mozambique. (U.S. Air Force Photo by Tech. Sgt. Chris Hibben)
hide caption

“CJTF-HOA’s support is critical to reaching areas affected by Cyclone Idai with urgently-needed humanitarian assistance,” said USAID DART Leader Sureka Khandagle. “As USAID continues to coordinate the U.S. emergency response in Mozambique, we’re grateful for CJTF-HOA’s partnership in helping get aid to people who need it most.”

CJTF-HOA provides unique capabilities to transport humanitarian cargo, including emergency relief supplies and food assistance, to distribution hubs that have been established in Maputo and Beira.

“Our primary mission during this disaster-relief effort is to provide logistics support to USAID,” said U.S. Navy Cmdr. Brian Patterson, CJTF-HOA Forward Coordinating Element operations officer, who was in the first group of CJTF-HOA staff that arrived in Mozambique. “Relief efforts of this magnitude require careful planning to ensure the right aid is provided at the right time to the right place. CJTF-HOA staff are working around the clock on the ground in Mozambique and at our headquarters in Djibouti to make that happen.”

“The airlift support provided by CJTF-HOA is not only critical to the immediate humanitarian response to the crisis, but also to laying the foundation for Mozambique’s long-term recovery from this natural disaster,” said David S. Feldmann, U.S. Embassy Mozambique spokesperson.

Teams from CJTF-HOA are conducting operations to airlift additional food, shelter, medical supplies, water, sanitation, and hygiene support and other relief materials to Cyclone-impacted areas throughout the next few weeks.

“Through the Department of State, and in support of USAID’s comprehensive response, CJTF-HOA is working closely with multiple of our African partners to provide strategic and operational-level logistics and command, control and communications capabilities,” said U.S. Army Col. Ryan P. O’Connor, CJTF-HOA director of operations. “Because we are stationed here on the continent, we are the closest response force to the problem. That allows us to be flexible and responsive to the changing requirements of a very fluid situation.”