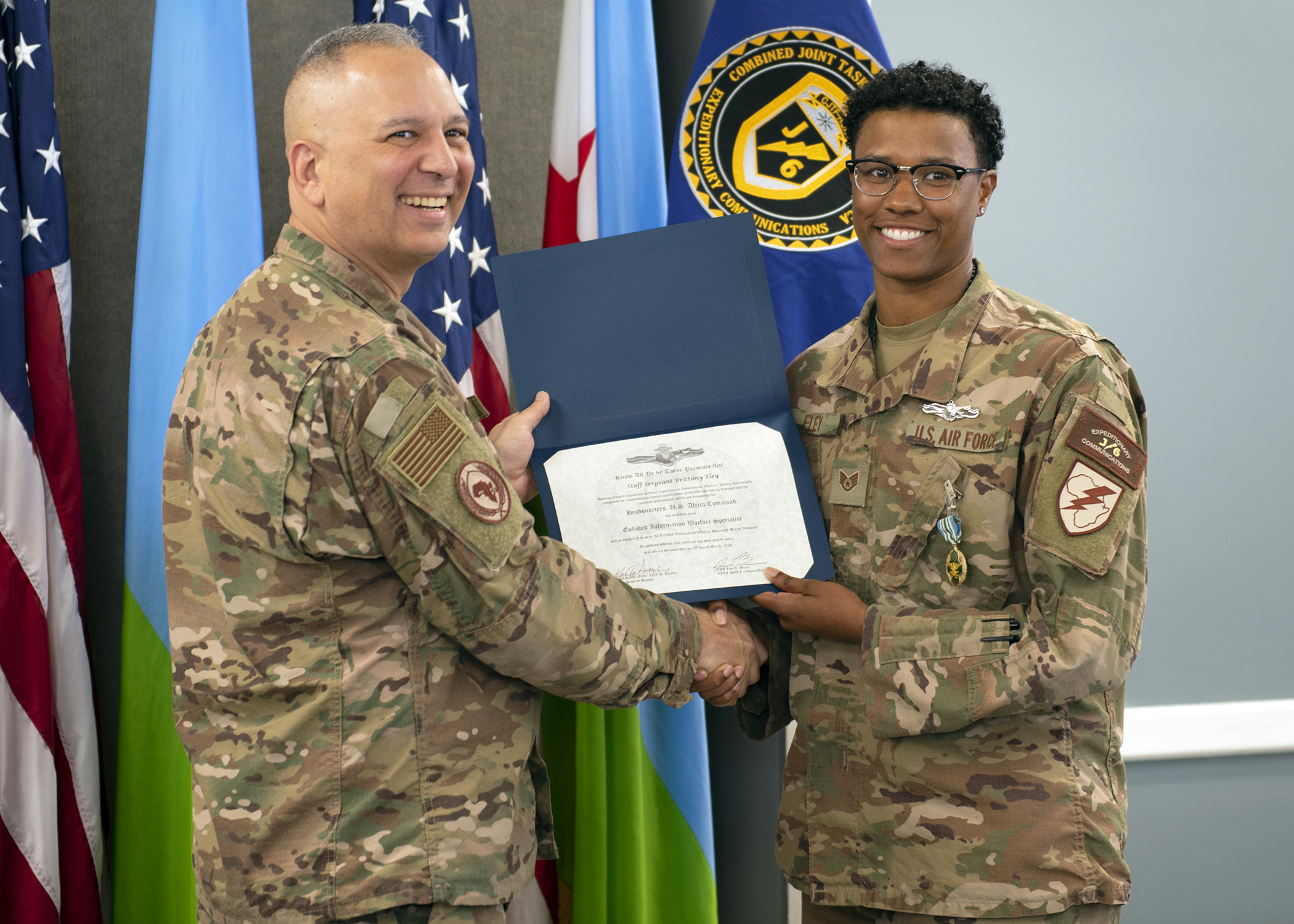 Sailors earn warfare devices to show they are knowledgeable not only in their field, but also in occupations related to the specific field attached to each warfare device. Information warfare capabilities include warfighting, mission effectiveness and command survivability.

“Attainment of EIWS designation signifies that an eligible Sailor has achieved a level of excellence and proficiency in their rating as well as a complete understanding of operational IW and its role in maintaining our warfighting supremacy,” said U.S. Navy Chief Petty Officer Kelly A. Joliet, communications directorate operations senior enlisted leader and EIWS program coordinator assigned to CJTF-HOA. “The ratings of aerographer’s mate, cryptologic technician, intelligence specialist and information systems technician make up the IW community.

According to Joliet, Eley is the first sister-service member in CJTF-HOA history to achieve this designation.

“This qualification is a huge milestone for IW community Sailors and affects retention and their promotion eligibility,” said Joliet. “There are intensive timeline constraints here at CJTF–HOA due to the limited duration of tours. Service members must complete the EIWS program in its entirety before they hit their 30-day redeployment date. For Staff Sgt. Eley to have completed this qualification within the limits of the timeline, and be the first to do it, is a huge success to the program we have at CJTF–HOA.”

Eley said she did not turn down the opportunity to delve into a sister-service qualification course despite the challenge of operating in a joint environment.

“The opportunity was presented to me when I first arrived, and honestly I blindly accepted the challenge and made it a goal,” said Eley. “After doing some research and talking to other individuals going through the same program, I quickly learned the gravity and relevance of the program. After realizing the breadth of applicable knowledge that I would obtain from this unique opportunity, maximizing my potential growth as a joint service leader quickly became my motivation.”

In order to become an EIWS, Eley had to complete several hours of formalized classroom training and countless study hours on 29 areas of study for the qualification. Also, she was assessed on a 100-question exam and two oral boards designed to test her requisite knowledge on Navy terminology, doctrine, core warfare areas and the impact of the IW mission of U.S. Africa Command.

“I believe this is a testament to her personal character and an example of her embracing fully the joint environment,” said Joliet. “She has yet to meet a challenge that she cannot overcome and this, while difficult, highlights her warrior’s spirit and commitment to excellence.”

For Airmen like Eley, who are deployed from the Unified Capabilities Assessment Program, 346th Test Squadron, Joint Base San Antonio-Lackland, Texas, becoming EIWS qualified can improve their understanding of network operations within their service and joint service operations.

“Going through this program is going to help me as an Air Force member in the cyber security field immensely,” said Eley, who then spoke about her home unit. “We perform cybersecurity and interoperability testing on commercial and Department of Defense (DoD) network products, so they can be securely implemented and leveraged by all DoD warfighters. Being exposed to the information in this program allowed me to see the direct connection between the services provided by the products we test and the far-reaching impact they have on other services’ missions. Being able to communicate the impact of our work to my co-workers will serve as further motivation and relevance to the work we do.”

The program is available to enlisted personnel assigned to CJTF-HOA, no matter their branch of service.

“I highly encourage all IW community enlisted service members eligible for enrollment into the program to join,” said Joliet. “Knowledge is power, and this program affords our fellow services key insight into the Navy’s IW contribution to the joint environment. We have a natural curiosity to what our fellow service cultures are like, and this is merely one avenue to share that.”

Eley encourages CJTF-HOA members of the IW community to obtain the EIWS qualification if possible.

“I would say go for it,” said Eley. “You have everything to gain and nothing to lose if you take on this challenge. This is a unique opportunity many U.S. sister-service members will never get again in their career, so do not let it pass you by.”