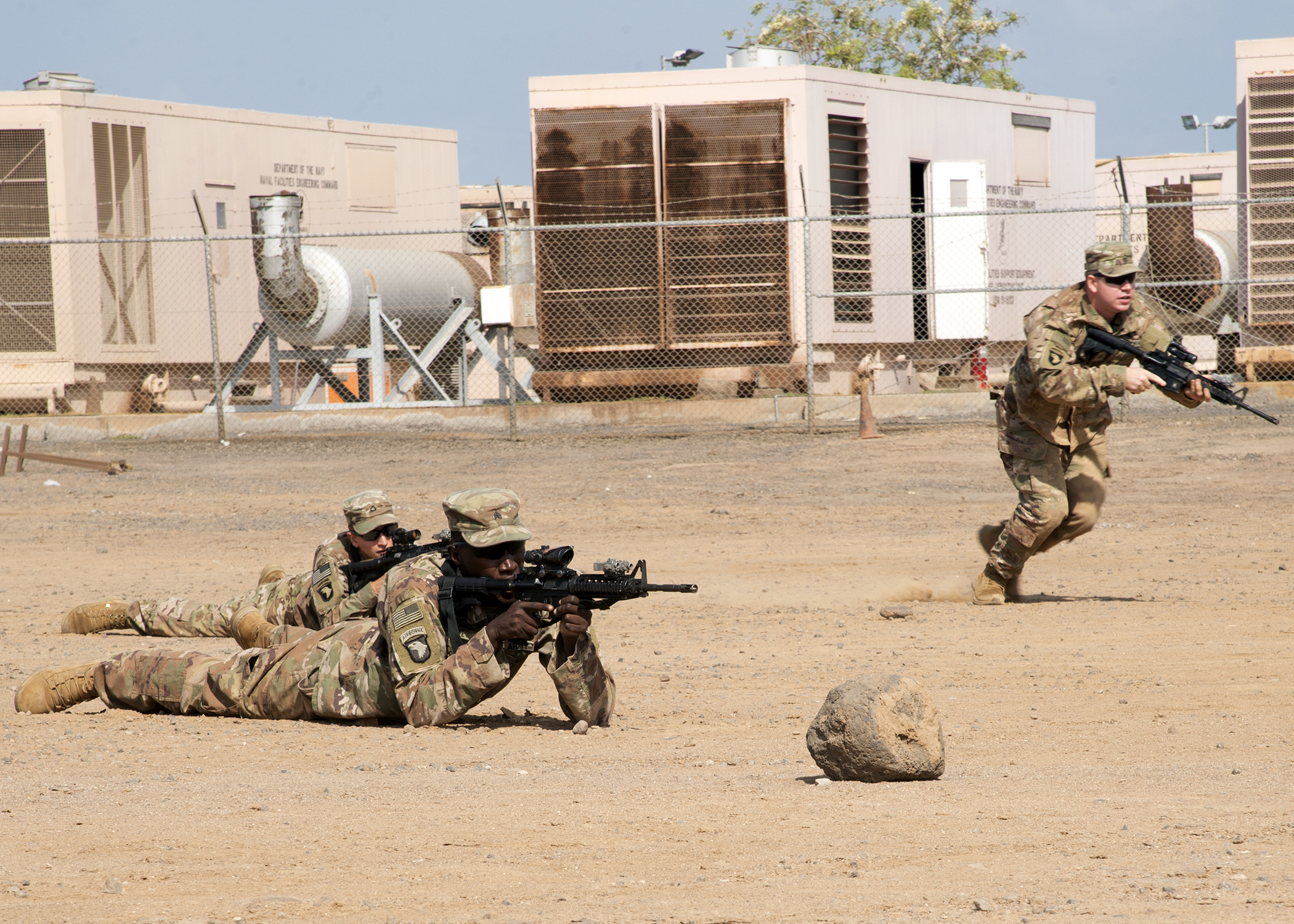 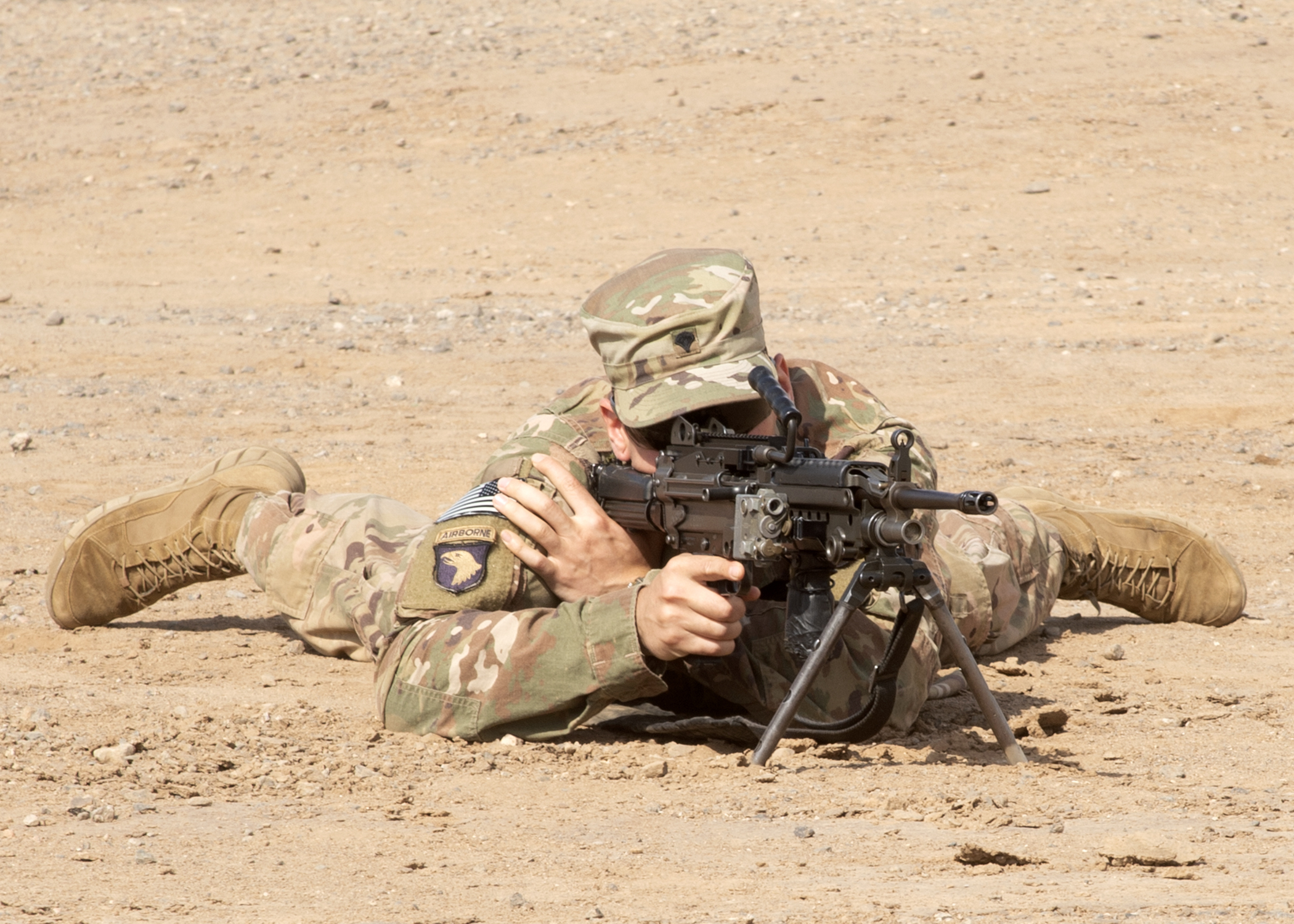 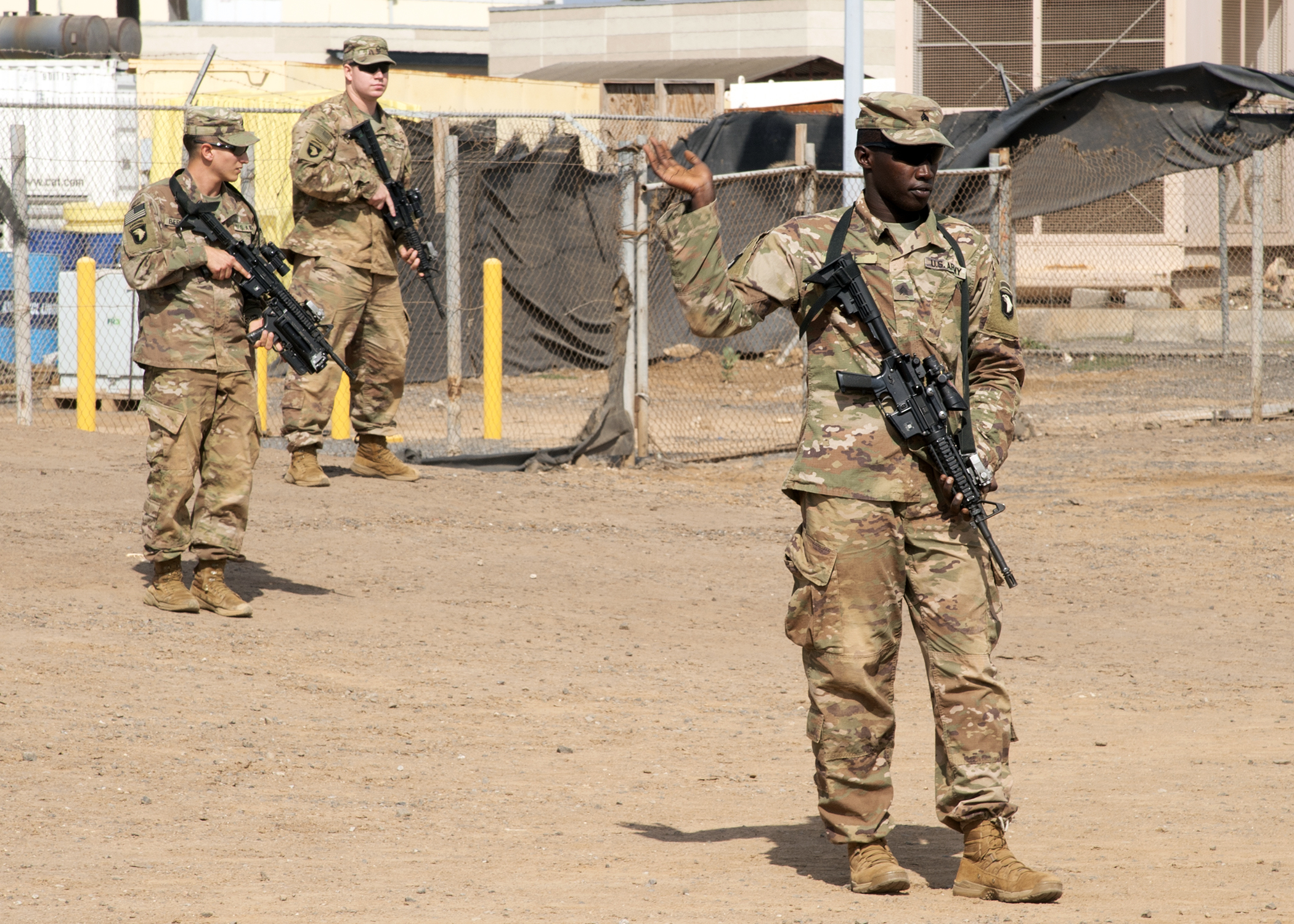 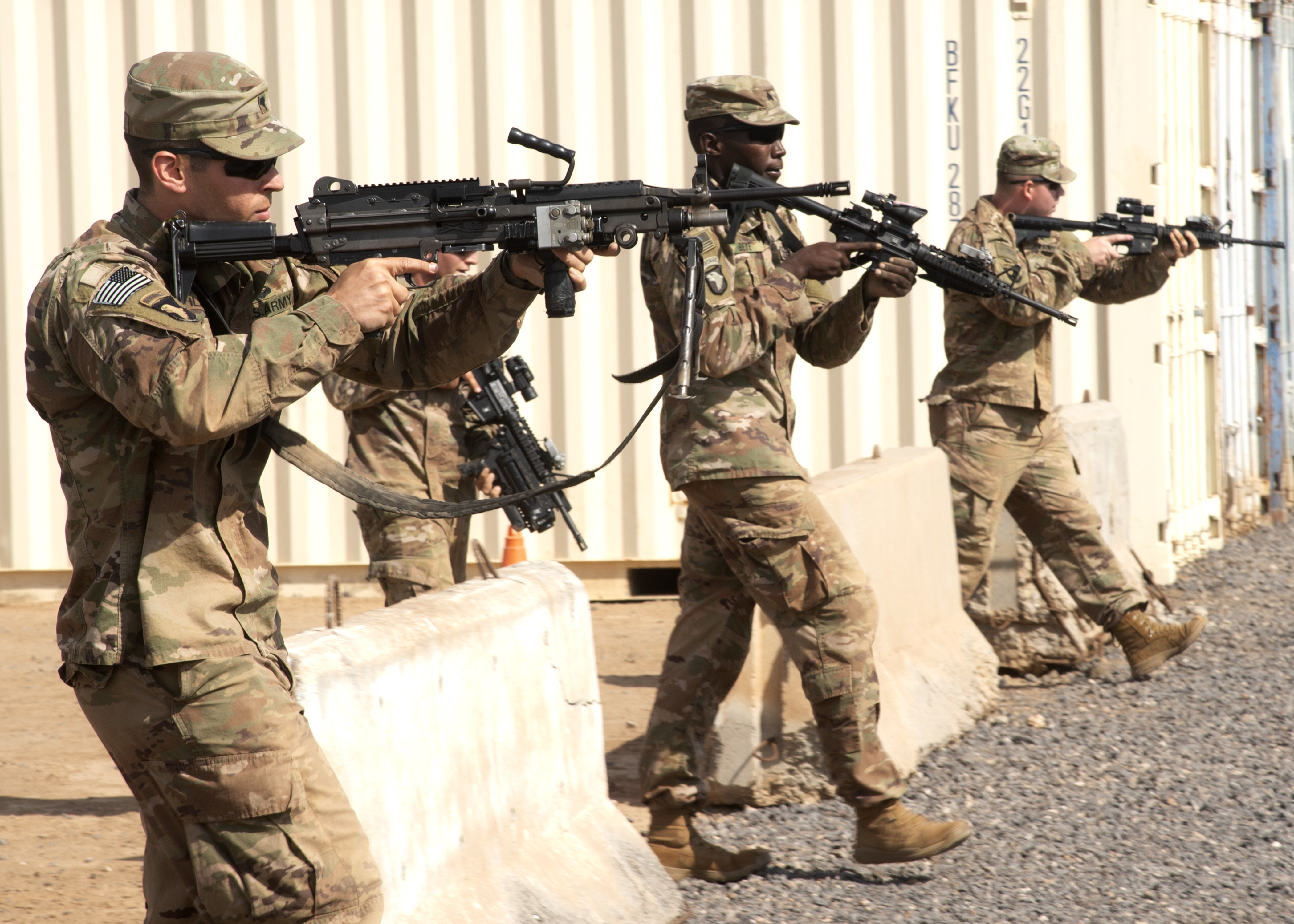 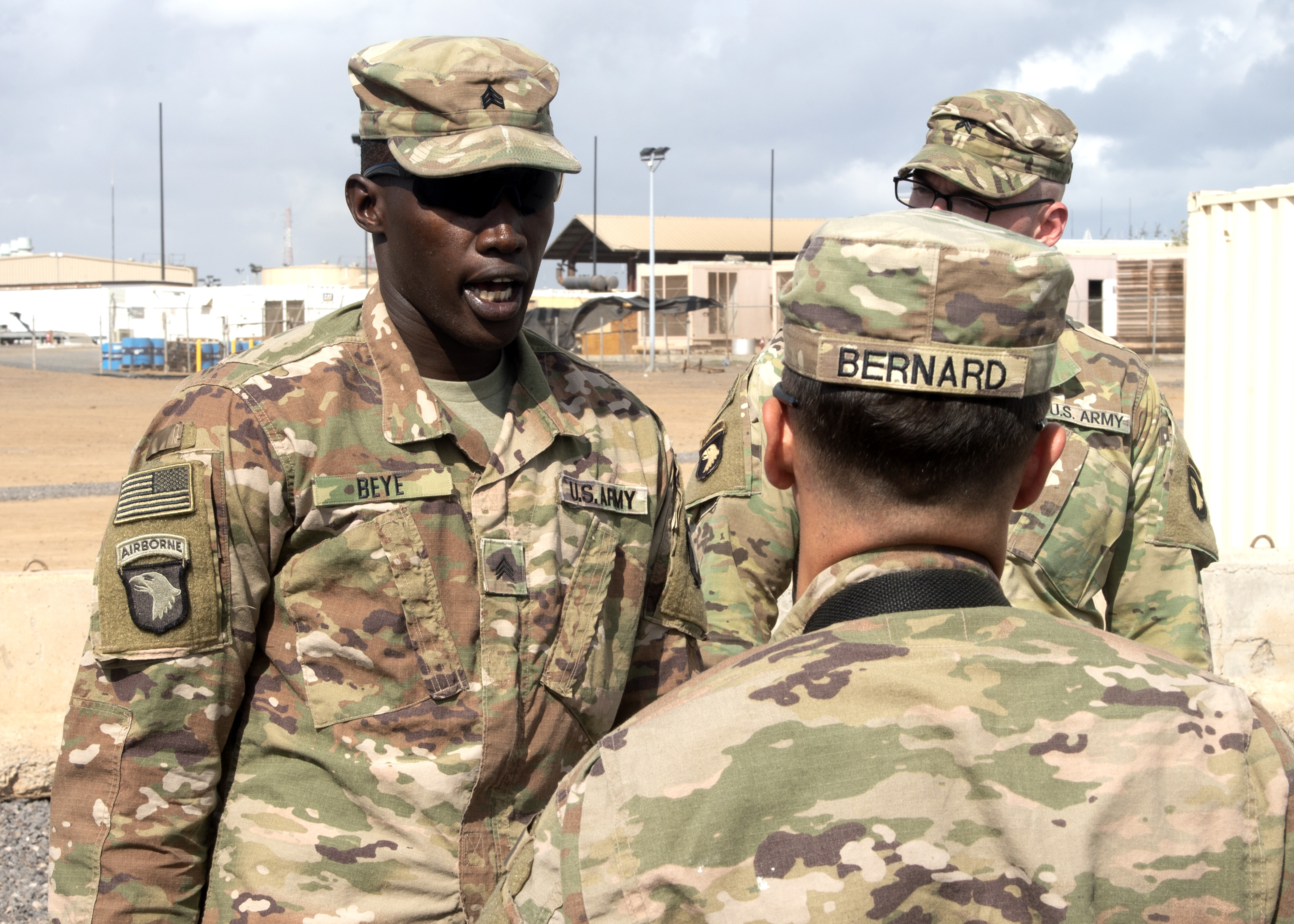 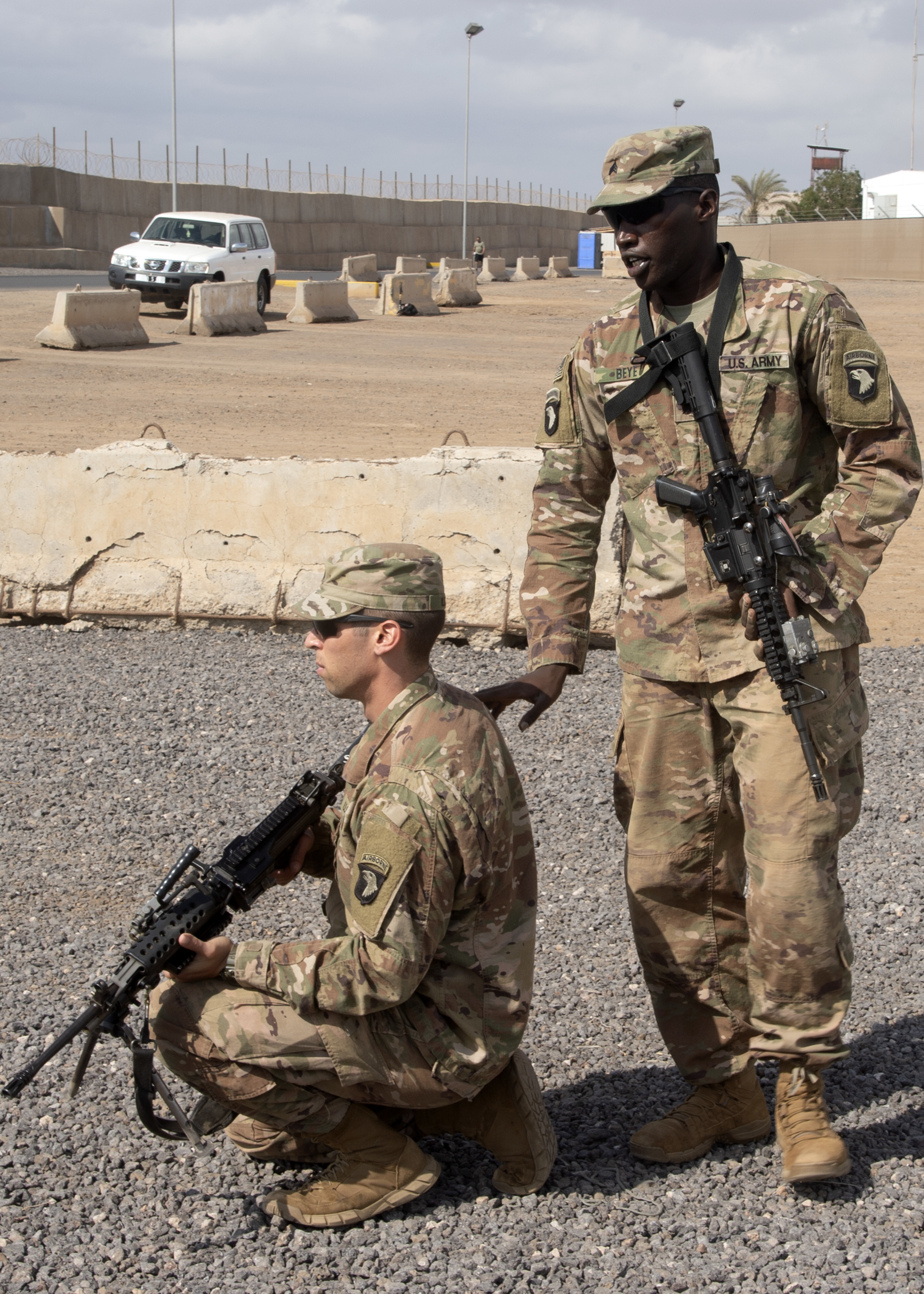 U.S. Army Sgt. Elhadji Beye motions to his team of Soldiers, all four of whom are members of the East Africa Response Force assigned to Combined Joint Task Force-Horn of Africa, to move forward on a dusty field on Camp Lemonnier, Djibouti.

The Soldiers aren’t in real danger. The weapons are unloaded and cleared, the gunfire simulated; however, Beye is training for a real mission that includes providing combat-ready rapid deployment capabilities to support crisis operations on the continent of Africa.

Serving in Africa holds significant importance to Beye. Although he is an American service member, he was born in Dakar, the capital of the small West African country of Senegal. When he left Africa at age 14 in 2007, he never imagined himself returning.

As the team reaches the end of the field, pacifying their simulated attacker – the objective for this React or Contact exercise – Beye kneels and traces lines with his finger and moves rocks around, creating a makeshift “map” in the dirt. He shows his Soldiers where their movements and tactics could improve as the sun peeks out from behind the clouds.

“Again!” Beye yells, projecting his voice across the now sun-soaked arenaceous field, and his Soldiers assume their original positions.

Beye said he prides himself on his attention-to-detail and his pursuit of perfection. Training Soldiers is a humbling experience, according to Beye. He said he never thought he could lead others the way he does now. Taking responsibility for those under his command can be both terrifying and exhilarating.

As a young immigrant, Beye said he had not considered the military during high school. He liked to play soccer and said he dreamed of graduating high school and becoming a professional. “A professional what though?” was the question that plagued him. A professional anything, really. He just knew he wanted the American dream, even if he wasn’t entirely sure what that meant.

“Hollywood played a big part in my decision to join the Army,” said Beye. “I liked the idea of serving, and serving a country that had done so much for me and my family.”

In May of 2015, Beye raised his right hand and swore an oath to his new adopted home; an oath to uphold the Constitution of the United States and to obey the orders of those above him, an oath to serve.

“I swore the same oath everyone else who serves swore,” said Beye. “Being a Muslim and a foreigner, I felt like I had more to prove at times. I’m a Muslim serving in the infantry, and I’ve changed a lot of Soldiers’ misconceptions about Islam. One of the core tenets of Islam is peace. Many people don’t know that. Since they have gotten to know me, my co-workers understand me, and my cultural and religious background.”

Beye said when he first told his family he wanted to join the U.S. Army, they were apprehensive.

“At first, my mom didn’t want me to join,” said Beye. “She watched the news and they were always reporting death in the military, whether it was during the war or suffering from PTSD. She eventually grew to accept it, and my whole family supports me. I wouldn’t make it here without my wife. It’s her second deployment experience as a spouse and, so far, everything is going well. My first deployment was to Iraq (2016-2017), so this is a lot better; less stressful for my entire family.”

Beye said it’s difficult being separated from his wife, who relocated to the U.S. from Senegal in December. She is adjusting to life in U.S. with the help of Beye’s parents and extended family who assist her daily.

With fewer than four years of service, Beye already leads a team of four Soldiers. He has high expectations for those who serve under him. A natural leader, Beye said he is confident he will be selected for staff sergeant when he is eligible for consideration after his current mobilization.

“(Beye) exemplifies what it is to be an outstanding team leader in the Army,” said Coyle. “He makes sure his Soldiers are prepared and ready for any task.”

Coyle said Beye imparts an abundance of knowledge and expects a high level of discipline amongst his Soldiers.

“Without discipline, you can’t accomplish anything,” said Beye. “I’m a (non-commissioned officer) and I like to get dirty with my Soldiers so they can see what I do and work twice as hard. You can’t order someone to do something you would not do yourself. I take care of them, and they take care of me because we are all a big family and, in combat, we will need each and every one to defeat the enemy.”

Beye said he has high hopes for the future, and plans on making the U.S. Army his permanent career.

“Moving forward, I want to commission as an officer,” said Beye. “I want to provide my child with everything she needs. I want my daughter to decide her own future, but as a father I will always be there for her to provide her guidance when making decisions in life. I serve for a better future for my family. I serve for a better future for us all.”