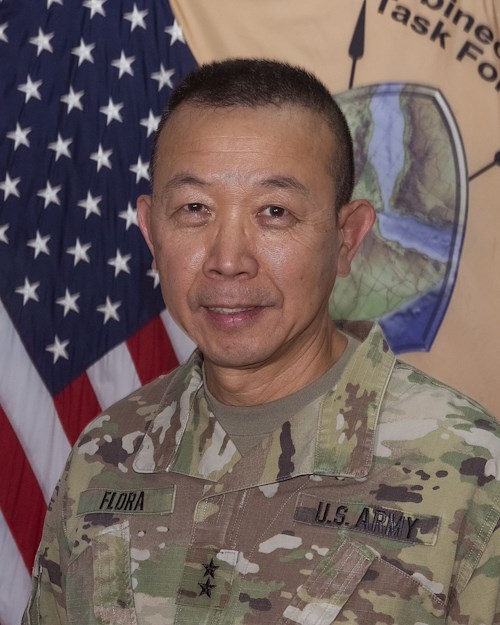 Flora earned his commission as an Infantry Officer from Virginia Military Institute in 1987, and has commanded at every level from company and brigade to state-level land component command. In addition to his command assignments, he also served in several key staff positions as the 116th IBCT Executive Officer, 29th Infantry Division G3, and JFHQ-VA J5. While serving in the 29th Infantry Division in 2001, Flora deployed to Bosnia as part of the G3 staff and served as the Deputy G3 Chief of Future Ops, Training & Synchronization with Multinational Division North.

As a battalion commander in 2006, he led the 1-116th IBCT in support of NATO peacekeeping operations in Kosovo. In 2011, he served as the Senior Advisor and Director, Afghan National Army, Ground Forces Command, ISAF Joint Command in Afghanistan. He served as the Assistant Adjutant General for strategic initiatives in the Virginia National Guard in 2016. Most recently, he simultaneously held the positions of both the U.S. Army Africa Deputy Commanding General and Army Reserve Component Integration Advisor and the Virginia National Guard Assistant Adjutant General - Army, Land Component Commander.

Following the Communist capture of Saigon in 1975, Flora and his brothers fled the city to avoid being drafted into the North Vietnamese military. He spent more than three years in the jungle and then fled by boat to Indonesia where he spent a year living in three separate refugee camps.

In his civilian capacity, Flora recently retired after 30 years with the night vision business of Harris Corporation in Roanoke, Virginia. He began his career as an Engineering Technician and Process Engineer, eventually advancing to vice president and director-level positions for quality assurance and process improvement. He is a certified lean six-sigma black belt with decades of image intensification night vision manufacturing and management experience and holds six patent awards related to the AN/PVS-14, AN/AVS-6 and AN/AVS-9 night vision devices.